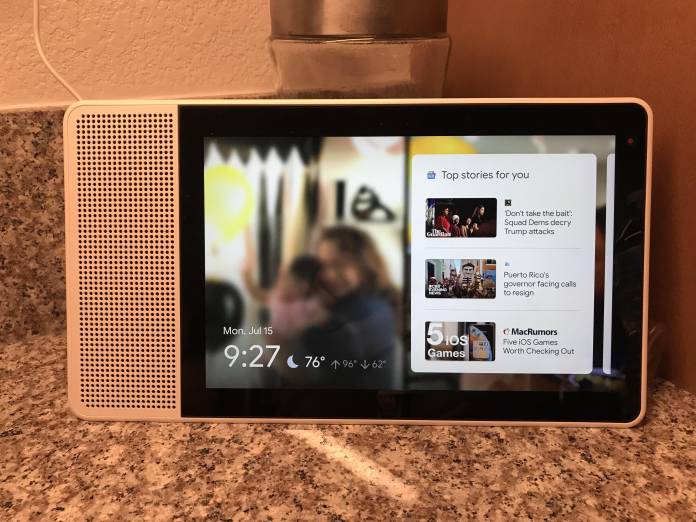 When Google revealed the home screen redesign that it will bring to its Nest Hub and other devices using their Smart Display platform, it wasn’t well-received by a lot of users. But it looks like they’re pushing through with it as some users of the Lenovo Smart Display are seeing the new user interface rolling out to their devices already. Reaction to it has been pretty mixed with some liking the new design while others still stuck to their original opinion that it’s a step down from the original UI.

According to 9 to 5 Google, If you’re not yet interacting with the display and it’s on Ambient Mode, the UI remains the same with either the fullscreen clocks or your Photo gallery. But once you tap on the screen, that’s when things differ, or go wrong, depending on how you feel about it. Your current background will become blurred and then your Google News top stories will show up on the right side of the screen.

The left side will show the time and date plus weather details on the bottom part and that is why some are saying that the left side of the screen is a waste of space. You’ll have to tap on the weather section to launch it to fullscreen and see your weather forecast. And as you scroll through your cards, your background will switch to solid colours so that’s a bit strange. The redesigned UI will make sense for future devices like the Nest Hub Max which will have face recognition but for the current displays, it’s not that pleasant to look at.

There are also some users saying that the display is lagging more now with this new UI so that’s not a good thing obviously. Hopefully, Google will listen to user complaints and eventually do something about it when they remember that not all devices using the Smart Display are from Nest or Google.

The redesigned UI is now rolling out through an over-the-air update for both the 8-inch and 10-inch models of the Lenovo Smart Display. If you have one, how do you feel about this new look for your home screen?