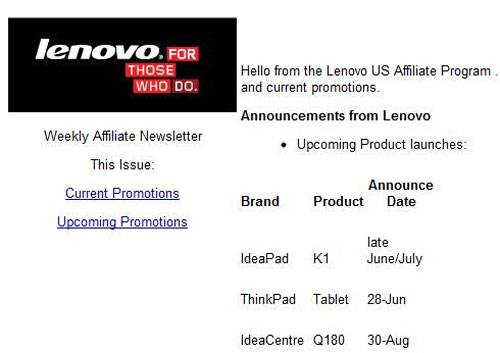 The tablet market is booming and everyone looking to take some of the sales that the iPad is racking up there are tons of new tablets headed to market. The vast majority of them will be using Android and one of the tablets coming we have mentioned in the last few weeks is form Lenovo. Lenovo has previously confirmed that two new tablets were coming this summer and one of them is the IdeaPad K1 Android tablet.

With listings from the tablet showing up online it’s no surprise that the launch for the tablet officially will come very soon. Lenovo has told its US affiliates that the launch date of the K1 tablet is set for late June or early July. That would mean the launch could come literally any day now. The real question is will the K1 have enough to catch the eye of tablet shoppers under the hood. The ThinkPad tablet will ship on June 28.

We already know the hardware specs of the K1. It will rock a 10.1-inch screen with 1280 x 800 resolution. The processor is a 1GHz Tegra II dual-core. The Os will be Android 3.x and the price is thought to be in the $500 range. Will you wait until the tablet hits the market before buying or do you think the K1 isn’t up to the task?