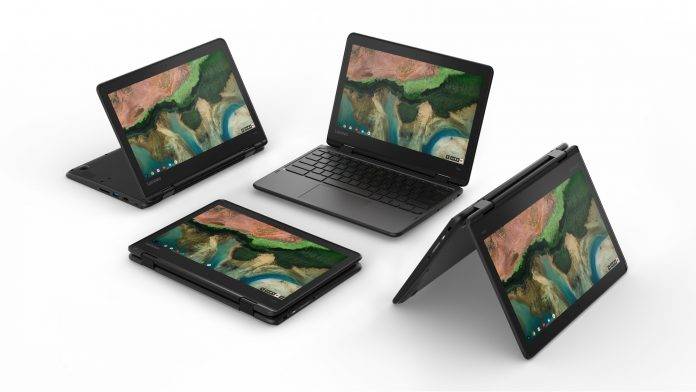 Lenovo has the Motorola brand for its mobile group. There are still Lenovo phones available but the company has been getting busy with other products such as VR kits, smart displays, tablets, and Chromebooks. At this point, we’re more interested in those Chrome OS-powered notebook computers that follow the MIL-SPEC standards. These are the ones that launched last month and now they are up for sale in key markets such as Australia, Brazil, Germany, Italy, the UK, Spain, and the United States.

The Lenovo Chromebook Trio consists of the Lenovo 100e, 300e, and 500e. They may be rugged alright and ready to take on hard challenges but they are affordable than most models in the same category. The Lenovo 300e and 500e particularly are now available on Lenovo.com before they hit retail stores in different regions.

The three Chromebooks from Lenovo have received new features that allow both Touch and Pen experience. They promise durability with the spill-resistant keyboards, reinforced ports and hinges, plus rubber bumpers. You are free to use them all-day, everyday and everywhere without having to worry about easy wear and tear. The flak-jacket-like protection makes it possible for Lenovo to keep these devices robust and secure.

The entry-level Lenovo 100e may look like any ordinary regular but the Lenovo 300e and 500e can be used as tablets with the 360-degree Yoga hinge. Use both Chromebooks in tablet or laptop modes depending on your need whether for entertainment or work.

The new Lenovo Chromebooks feature Enhanced Touch. It lets you use any writing implement available like pencil, pen, paperclips, or anything that resembles a pencil as long as conductive. Meanwhile, the Lenovo 500e also makes use of the EMR stylus. Google’s tech allows provision for machine learning algorithm and custom coding. These then can predict the movement of the pen.

Another noticeable improvement is the reduction of lag of the system and pen stroke. The tech actually comes as an API that can be integrated by devs in their applications.