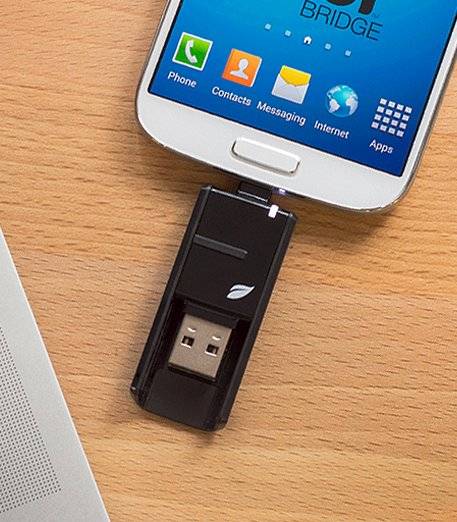 Or in other words, you can swap the Bridge from your computer to phone (or tablet) without the need for any additional cables. The Bridge is available in a 16GB or 32GB storage option and is priced at $17.99 or $28.99 respectively. While all this sounds interesting enough so far, there is one catch that comes with the supported devices — for now this will be limited to those running Jelly Bean.

Aside from Jelly Bean, there is a device compatibility list because unfortunately not all Jelly Bean devices are supported. The Bridge also needs devices with support for a micro USB On-The-Go (OTG) connector. The list includes a variety of Samsung, HTC, Motorola and LG smartphones as well as Samsung, Lenovo and Asus tablets. Also worth noting, the Leef Bridge drive does support the Samsung Galaxy Camera.

The Leef Bridge will work with a variety of file managers on Android, however it comes with the recommendation of ASTRO File Manager. And for those looking to avoid any additional cost, ASTRO File Manager is available as a free download from the Google Play Store. Otherwise, on the computer side the Leef Bridge supports Windows, Mac and Linux (with Kernal 2.6 or later).

At present the Leef Bridge is available by way of the Leef website. Finally, while storage is limited to 16GB or 32GB at the moment, Leef has said a 64GB model will be available relatively soon. Pricing for the 64GB Bridge has yet to be announced, however the drive is expected to arrive in July.