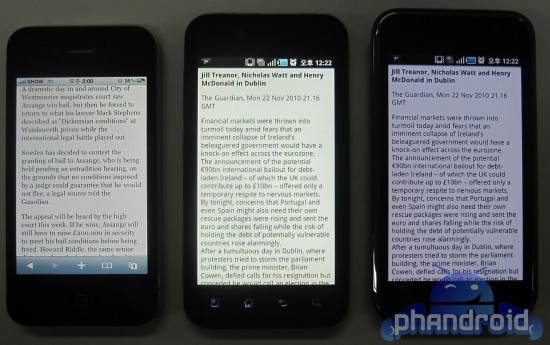 A tipster has been speaking with our pals over at Phandroid, giving them a few pics of what they say is a new phone by the name of LG B. Word on the street is that they’ve only blurred or chopped some portions of the photos to protect the identity of the photographer, but check out that brightness! The first photo you see here is said to be the LG B sitting in the center with an iPhone 4 on the left and a Samsung Galaxy S on the right. Wildly bright?

The device also appears to be extremely thin, being held up next to an iPhone 4 shows that its very close to the same size. When set on a table, the LG B appears to be flatter than the Galaxy S. Phandroid was sent a specs sheet showing what could be the details of the phone, saying that it (B) has a 4.0″ screen, brightness of 700 nit (whoooa), and you’ll notice a blacked-out floating phone to the right. This is what generally ends up telling us that this is a presentation sheet made pre-final-product to be shown in-office for early presentations.