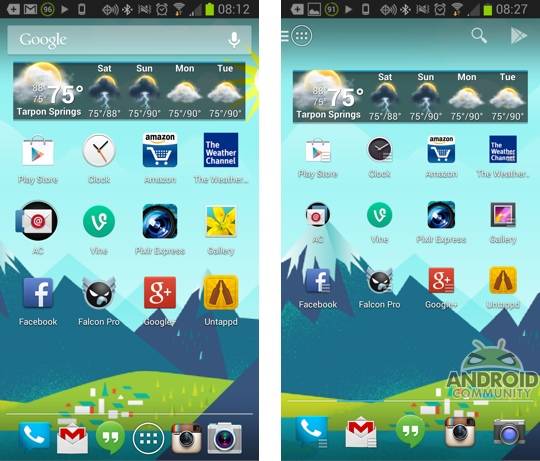 One of the attractions of using Android is the ability to customize. This can be everything from adjusting and tweaking the layout using your stock setup, which could include a TouchWiz or Sense experience and it can also include using third party launchers. The launcher category is big and it seems to be growing at a fairly regular pace. Without trying to name every single launcher available, just in recent history we have seen mentions of Apex Launcher and Chameleon as well as Everything.me and Facebook Home.

Personally I have tried quite a few, but have been a long time user of Nova Launcher. Despite using and really liking Nova, I had been been keeping an eye on Action Launcher and was recently wowed by the looks of Yandex.Shell. With that in mind, now seems like as good a time as any to check out some of the alternatives. The few that are being looked at today include Action Launcher, Yandex.Shell and Nova Launcher.

I should also admit that I am going into this with a bit of bias as I really like Nova. That said, Yandex.Shell looks really nice and Action Launcher has some cool sounding features and they both seem worthy of at least checking out. Yandex.Shell is free, but Action Launcher is $3.99 so if nothing else, maybe I can answer the question as to whether others should shell out the $4 or continue watching the app and seeing what future updates bring.

Nova Launcher can be free or paid. The free version is rather full featured, however the paid ‘Prime’ version does include some worthwhile extras such as folders in the app drawer, gestures, dock swipes and unread counts. Rather than focus on the Prime version, lets continue with the free version, which is what I had been using. With this version you can expect color themes, the ability to change the accent color, icon themes, a scrollable dock, infinite scroll and much more.

With Nova Launcher you can also bulk add apps to the desktop or a folder, you can overlap widgets and even add a 1×1 widget into the dock. Some of the smaller features that I enjoy is the ability to adjust the icon size and even add more than the standard amount of apps into a dock. It is also nice being able to have and scroll through multiple docks. Basically Nova Launcher provides lots of options for customization and it should be good for those looking to make things look a bit more to their liking.

With Action Launcher I jumped right in with Pro version which is priced at $3.99 and will say that my previous reservations about this launcher was due to the focus on widgets. You see, aside from using a weather widget, a calendar widget and the Evernote widget — I never really had much interest in using widgets. I can say that Action Launcher has changed that. When you load up Action Launcher you will notice that many apps have a three bar icon in the lower right corner and that means easy access to the widget from the app icon.

A simple swipe up (or swipe down) on the app icon will launch the widget. Basically, this provides a simple way to access widgets without having them take up lots of space on your homescreen. This setup has also been causing me to make some changes to the way my homescreen looks. For example, after using Action Launcher for a few days I was able to remove the calendar widget and simply have the calendar app icon sit on the homescreen. Some other perks of Action Launcher includes a persistent search and Play Store link in the upper right as well as access to the app drawer in the upper left.

Action Launcher also supports icon packs as well as Android tablets. It doesn’t seem to have as many color customization options as Nova Launcher, but that aside, it does have more than enough that even coming from Nova — I didn’t feel like I was losing anything important. For example, you cannot have multiple docks, but you can customize the number of apps that fit in the dock. One small annoyance with Action Launcher was the lack of infinite scroll, which means you can swipe all the way in one direction and get stuck at the end. Not a deal breaker, but something that is easy to get used to when available.

Otherwise, Action Launcher allows you to backup your settings to an SD card (just like you can with Nova) as well as allow for you to hide apps in the app drawer, adjust the number of home screens, adjust the grid sizes, page margins, resize widgets and much more.

Yandex.Shell is a great looking launcher and one that has a really nice looking 3D carousel as well as quite a selection of available panels and widgets. Plus, you still have access to your regular Android widgets. Overall, what grabbed my attention with Yandex.Shell was the way it looked. But that said, there were some quirks that kept me from really getting comfortable.

For example, you can add a button in your dock to access the 3D carousel for homescreen switching, however that button has to sit centered in the dock. It also seems off-balanced that you have the flat single colored icons in the dock (which matches the coloring of the panels and widgets), however all of your regular apps that sit on the homescreen are the regular colors. This launcher also lacked many of the customization features that others have a standard offerings.

Basically, Yandex.Shell is one that looks really good and to be honest, runs really smooth. But on the flip side, there just wasn’t enough to keep me using it at the moment. I will say that it is one that I will watch moving forward and with some updates and additional features, it may be one that gets a second look down the road.

In the end, Yandex.Shell just didn’t have everything the others did and was quickly removed. The interesting part here, while Nova Launcher is still installed and still setup, Action Launcher has been the active launcher since this little test ended. Not only has Action Launcher remained, but it has shown me that widgets can be truly useful at times — especially when they are hidden away until needed. Simply put, Action Launcher was a well spent $3.99.