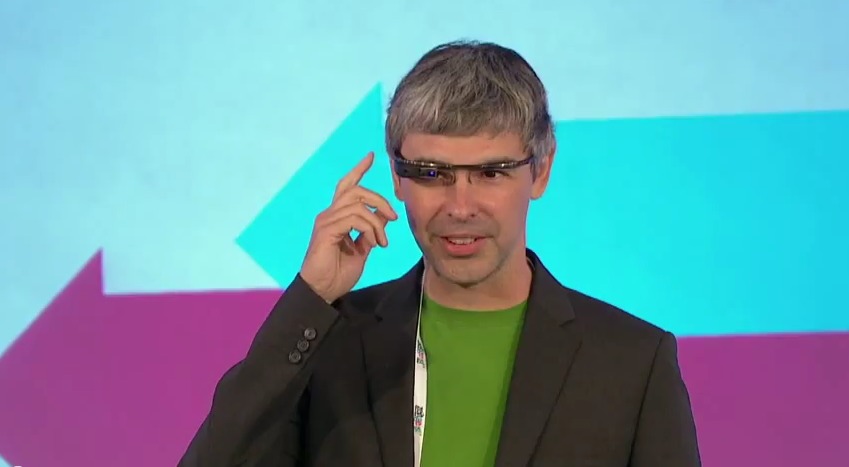 It sure would be nice to be the CEO of Google right about now. Google’s CEO Larry Page today was sporting the awesome and highly anticipated Project Glass Google Glasses at the Zeitgeist 2012 event in London. Showing off the pre-release and early stages hardware for everyone to drool over, then quickly takes a photo. More details and video below.

I think I’d have that same grin on my face if I’d just snapped a photo and then shared it with all my colleagues in a matter of seconds too. Before speaking at Zeitgeist for the Beyond Talk session Larry Page started off with Project Glass. Calling them Google Glass, because there is only one, and not glass on both sides. Here’s what he had to say while using his very real — working version of the glasses.

“These are obviously Google Glass, it’s only Glass because it’s only on one side. It’s still in a bit of an early stage but I’m really excited to be able to have one. And to have it working. … It doesn’t yet show me all of your names, but I’m really glad that you’re all here.” – Page

It really is neat to see them working and you can see the images flickering right on the glass while in use. He appears to snap a quick photo using a side-control touch sensitive area on the top of the device near his temple, then hits another button to share it with his friends and co-workers. Whether he actually did all that we won’t know, and I don’t see the picture on his Google+ page but I’d love to get a look at it.

Obviously these are just an early prototype but they appear to have a physical dedicated camera button for snapping photos, but hopefully that will all be voice controlled on a final version if they ever see their way to the market. We’ve seen hands-free photos taken with Project Glass, so it might have both options. Around to the side seems to be a touch-sensitive area for swipes and gestures but at this point it’s really anyone’s guess.

If you’d like to see them in action on Google’s CEO Larry Page himself then have a quick glance at the video below. Enjoy it while it lasts, and don’t get too jealous (I know I am). Hit the timeline links below for additional coverage of Project Glass. I want it now!