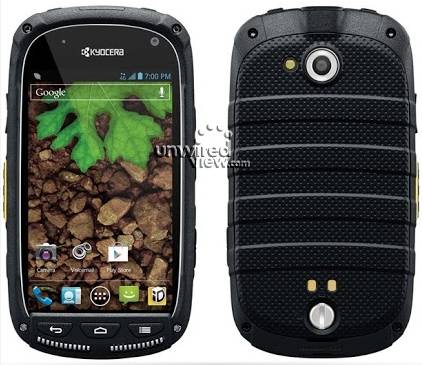 A new device from the folks at Kyocera is apparently in the works with a rugged design and those 4G LTE radios over on the Now Network. This won’t be gracing Verizon or AT&T’s 4G LTE, but today we’ve learned more details on the upcoming Kyocera Torque so lets take a look. Today the smartphone hit the FCC so it should be arriving soon.

According to some leaked photos provided by UnwiredView, the above smartphone is the new Torque and it will be quite the little durable and budget handset. We certainly can’t call it pretty, or handsome, or even remotely attractive — but it will be able to handle the elements quite well.

In what appears to be one of the worst designed smartphones ever, the Kycera Torque does have one thing going for it. That being it will be the first 4G LTE capable IP67 rugged smartphone for the carrier, and for the US. Now on to those depressing specs that will surely leave something to be desired. Obviously this phone is all about ease of use and durability, but the specs aren’t too great.

The Torque comes with a 4-inch wVGA 480 x 800 resolution display, not even qHD, but does appear to be running what we’re told is Android 4.0 Ice Cream Sandwich. As you can see from the images you have a front and rear facing camera, dedicated Android navigation buttons, an extremely industrial and waterproof design, and possibly wireless charging pins on back. The device also hit the FCC today confirming NFC support, among other things, and could be a sign the carrier will be launching this rugged smartphone with Google Wallet on-board soon. If you need a durable smartphone stay tuned for more details.