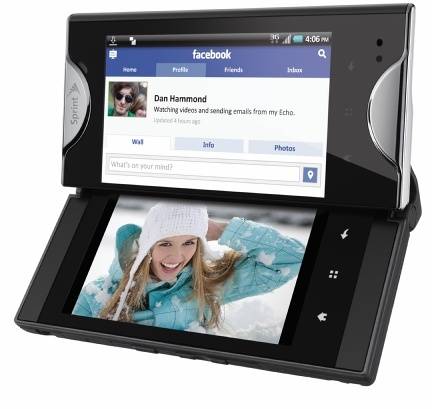 Sprint has announced that the dual touch screen Kyocera Echo will be launched on the Now Network on April 17th. Pre-orders will being March 26th with the Echo going for $199 with a two year contact. Current Sprint users will also be able to purchase the phone through their eligible upgrade option. To celebrate the first dual screen Android phone, Sprint is hosting a “Duel for Dual” promotion where Android fans will have the chance to compete for a free Echo of their own (I wonder if the 2 year commitment comes with it).

The Android Community has been abuzz every since we reported of the Echo last month. Since then, we’ve gone from thinking it was an oddity, to well, it’s okay that’s it an oddity, we love odd Androids! And what’s not to love? The Echo has dual 3.5 inch WVGA screens connected by a three dimensional pivot hinge. They can work individually, or together side by side as an integrated display in what Sprint and Kyocera are calling “Simul-tasking™.” The Echo will be released with Android 2.2 (Froyo), but you can bet that Gingery goodness won’t be far behind.

Other features of the Echo include WiFi hotspot capability of up to five devices, a 5MP camera with flash, autofocus and digital zoom that can capture 720p HD video, Stereo Bluetooth 2.1, and an external microSD card slot that can handle up to 32 GB. Too bad they didn’t also connect up with Nintendo and offer game playing of original DS games ala the Xperia Play and Playstation. I mean, since it’s an adult DS and all.

The Wait is Almost Over – Kyocera Echo™, the Nation’s First Dual-Touchscreen Smartphone, to Launch April 17 Only at Sprint
Beginning March 26, Sprint customers can ‘Reserve Now’ for $199.99

OVERLAND PARK, Kan. & SAN DIEGO (BUSINESS WIRE), March 14, 2011 – Sprint (NYSE: S) and Kyocera Communications Inc. today announced availability of Kyocera Echo™, the nation’s first dual-touchscreen smartphone, on April 17 in all Sprint retail channels, including the Web (www.sprint.com) and Telesales (1-800-Sprint1). The innovative Android™ device will sell for $199.99 (excludes taxes) with a new two-year service agreement or eligible upgrade*. Beginning March 26, consumers can visit www.sprint.com/echo to “Reserve Now” and be among of the first to get their hands on Echo.

“Continuing to set the bar high in Android innovation, Sprint is thrilled to bring this industry-first device to the market,” said Fared Adib, vice president Product, Sprint. “Kyocera Echo’s unique dual-screen, Simul-tasking™ capabilities allow customers to do things they have never before done on a wireless handset. We believe customers will really appreciate and leverage the dual-screen capabilities and are excited to partner with Kyocera to bring this innovation to Sprint customers.

Announced in early February, Echo already has received rave reviews from industry insiders. According to Boy Genius Report, “Kyocera Echo is unlike any other device we have ever seen, and it’s truly innovative.” Phonescoop also touted, “[Echo] is one of the most unique Android phones we’ve ever seen.”

Kyocera Echo features two high-resolution 3.5-inch WVGA touchscreen displays connected by a three-dimensional “pivot hinge” that enables the two displays to operate independently, side-by-side or combined to form an oversized 4.7-inch (diagonal) integrated display. The Super Copper Alloy hinge is so unique it has six patents pending, and so tough it has passed severe durability testing.

“The industry response to this innovative device has been overwhelmingly positive, confirming the need for a pocket-size multitasking handset with a tablet-like experience,” said Yasuhiro Ohishi, vice president of sales and marketing at Kyocera Communications Inc. “With the multitude of Android apps available for download, Echo is an ideal tool for today’s multimedia, multitasking lifestyles.”

Kyocera Echo operates on the Android 2.2 operating system and has access to more than 150,000 apps in Android Market™. Available at www.echobykyocera.com are videos showing Echo’s unique functionality and a complete look at the phone’s specifications and features, which include:

Sprint is offering customers a unique opportunity to reserve Kyocera Echo for purchase. Through the reservation process, customers will be able to reserve their devices online, pick them up in a Sprint Store, and receive the full retail experience, including Sprint’s Ready Now service. In addition, Sprint customers visiting the Echo site will also have the opportunity to win an Echo in the “Duel for Dual Sweepstakes.” Beginning March 15, customers can use their “sharp-shooting” skills to compete against others to win their first dual-screen smartphone. Customers can reserve their Echo for purchase at www.sprint.com/echo beginning Saturday, March 26, while supplies last. Customers who reserve Kyocera Echo will be able to complete their purchases beginning at 9 a.m. ET on March 26, and must complete their purchases no later than April 14 at 9 p.m. ET. The devices will be available for pick up on April 17.