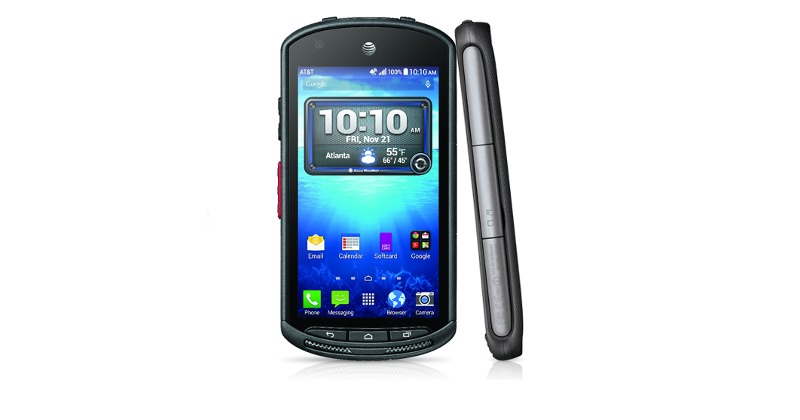 Continuing its barrage of Android-related announcements, AT&T is outing the first rugged Kyocera device to land on its shelves. The Kyocera DuraForce, like many of its brethren, is gifted with a handful of features that make it usable under the most extreme conditions. Unfortunately, that sometimes also translates to somewhat mid-range specs as well.

To get those specs out of the way first, the Kyocera DuraForce is powered by a Qualcomm Snapdragon 400, a quad-core CPU that runs at a max of 1.4 GHz. Storage is capped at 16 GB and the microSD slot is capable of supporting up to only 32 GB more. The display is a 4.5-inch 720p one, though that has impact-resistant glass and can be used even when wearing gloves. With those specs, the 3,100 mAh battery is sure to give users quite a long life.

Of course, the entire point of Kyocera’s rugged devices is, well, their ruggedness and here the DuraForce does not disappoint. It boasts of the highest IP68 rating, letting it survive under 6 feet (1.8 meters) of water for up to 30 minutes. The MIL STD 810G certification also means that it can withstand quite an amount of shock and battering. Adding to the theme of industrial use, the DuraForce features Enhanced Push-to-Talk (EPTT) functionality, with a dedicated button for such purposes at the side, reminiscent of walkie talkies. That button, however, can be repurposed to launch frequently used apps when not used for EPTT.

Starting November 7, the Kyocera DuraForce will be available from AT&T for $49.99 with a standard two-year contract. Without one, it costs $389.99. Business and government customers, however, can get it at a discounted $24.99 under certain provisions.