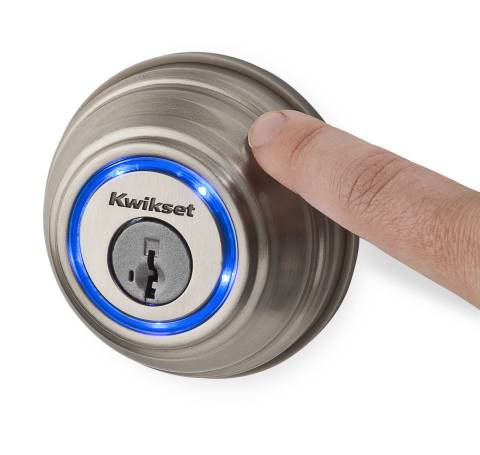 It is looking like Android users may soon have another option when it comes to ditching the front-door key. Kwikset has announced that pre-orders are beginning today (July 30th) for the Kevo deadbolt. This is a Bluetooth-enabled deadbolt and it brings the promise of being “intelligent enough to communicate with a smartphone and unlock with a simple touch.”

To that point, Kwikset touts the Kevo deadbolt as being able to allow the user to unlock their front door without even having to take their smartphone out of their pocket. The setup works with Bluetooth 4.0 LE technology and pairs with an app running on your smartphone. The Android app is said to currently be “underway.” Kwikset has yet to say when the app would be ready, however the deadbolt isn’t expected to ship for a few months time.

The pre-orders are available with several retailers including Amazon and Newegg as well as Home Depot and Build.com. The pre-orders all point towards shipping at the end of October, however Kwikset notes a shipping estimate of some time in September. The deadbolt will set you back $219.

The Kevo deadbolt is available in three finishes; Satin Nickel, Venetian Bronze and Polished Brass. The deadbolt runs on four (included) AA batteries and ships with the deadbolt itself as well as one fob, two regular mechanical keys and two eKeys for your smartphone. Well, technically those eKeys will have to be downloaded separately. Otherwise, Kwikset has said those AA batteries should last for up to one year.

Using this setup seems simply enough, the lock catches the signal from your phone (or fob) and you then just have to touch the lock with a finger to trigger it. Aside from ease of entry for you, this setup also allows you to send an eKey to others. This assumes that other person has a capable smartphone, however it could mean you can easily allow someone to enter your house even if you are not around.