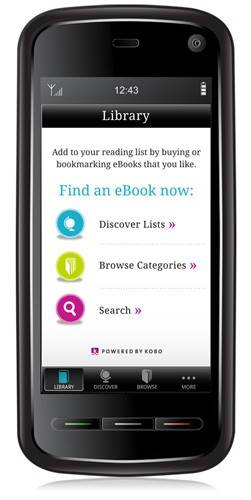 If you’ve never heard of Kobo, we can’t really fault you. But, to be fair, they’re literally everywhere. Today marks the official announcement that the eReader, which may be better known for its tie-in with Borders bookstores, along with its global eBook store, is heading to the Android mobile Operating System (OS). Yes, this beats Amazon’s Kindle app by a at least several weeks, so it’s probably something you’ll want to give a shot if you’ve been waiting for a good eReader to hit your favorite handset.

If you already have a Kobo account, then you’ll be happy to know that all your purchased books will go ahead and appear right on your device (right after a quick sync, of course). Kobo itself supports ePub, and there’s upwards of 2 million titles in its online bookstore for you to peruse on your device. You’ll also be able to buy books right from your device, thankfully. And, yes, if you’re still staring at that picture, it certainly does look like a device bred from the Nokia pits, but we won’t hold that against Kobo. (That doesn’t mean you can’t, though.) If you’re interested in checking it out, the application should be available in the Market right now, but we’re hearing contradictory statements from folks. So if it isn’t there, just keep checking throughout the day until you find it. If you download it, let us know what you think.

TORONTO – June 18, 2010 – Kobo, a global eReading service, today announced availability on Android-enabled smartphones. Just like other Kobo applications, Kobo for Android is designed to provide the best eReading experience to customers around the world. This announcement furthers Kobo’s goal of delivering any book on any device. The service’s open standards mean that customers can access and read their books from a variety of devices.

“Now the fastest-growing mobile platform, many of the new Android devices are great for eReading and we’re excited to deliver Kobo to the millions of Android users around the world,” said Kobo CEO, Michael Serbinis. “We’ve adapted the features our customers love and expect from Kobo to ensure that we provide the best reading experience for Android-enabled smartphones.”

Kobo is available for free on Android smartphone’s through the Android Market. Kobo supports ePUB file formats including rich text and images, offering a top-quality reading experience. Existing Kobo users can login to their Kobo account and start reading their books right away. Additionally, there are over two million eBooks available for download through the Kobo bookstore, thousands of which are available for free and best sellers start from $9.99.

Kobo has developed a strong global following for their eReading service, which includes free apps for the iPhone, iPad, BlackBerry and Android, as well as a dedicated Kobo eReader. Now Android users can log in to their existing Kobo account and download the eBooks they’ve already purchased at no additional cost. Furthermore, a Kobo user’s library and bookmarks are automatically synchronized across all the applications and the Kobo eReader offering a seamless Kobo experience on any Kobo-enabled device.

For more information or to download Kobo, visit www.kobobooks.com.