There is no doubt that mobile data usage is growing at a rapid pace, but users who are still adjusting to the trend my not be fully aware of the literal cost of their new adopted lifestyle. Carriers are coming to the rescue with a new Know My App website that tries to give users an idea of just how much data is being used by some of the most popular mobile apps on the market.

The site is run by CTIA-The Wireless Association, an international organization comprised of different companies involved in the wireless communications industry, including of course, mobile carriers. They have compiled a list of some of the more popular apps and have benchmarked their average data usage. The result is a rather useful database of apps that give an insight on how much they might consume relative to common data plans.

Apps are grouped into familiar categories such as games, regular apps, music apps, business apps, and so forth. There’s also a search function available in case you know the app’s name but not its exact category. Each app’s individual page details how much data is consumed on average per month and how much it impacts data plans in 300 MB, 1 GB, 2 GB, and 4 GB configurations. But it actually goes beyond just simply relaying that data. The website even describes how the data usage was tested and which device was used on which network. 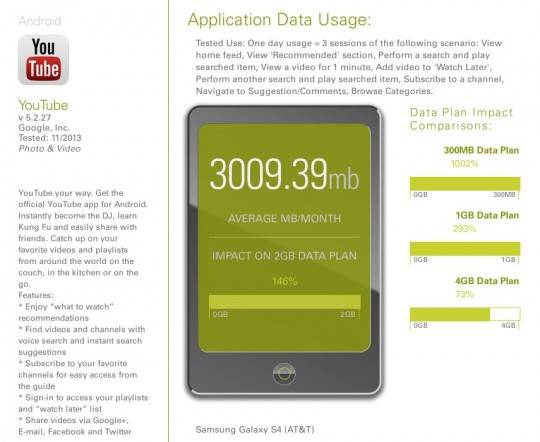 While Know My App does give useful information, it is more of a rough estimate and not to be taken as a definitive source, especially considering it only covers a small slice of the app market pie. Intertek, the independent company that does the testing, warns that actual data consumption will differ depending on how the app is used and changes to the app itself. For all other situations, the site offers some advice such as switching to secure WiFi networks when available, adjusting apps to only update over WiFi, or simply uninstalling apps you don’t use anyway.

SOURCE: Know My App
VIA: Engadget