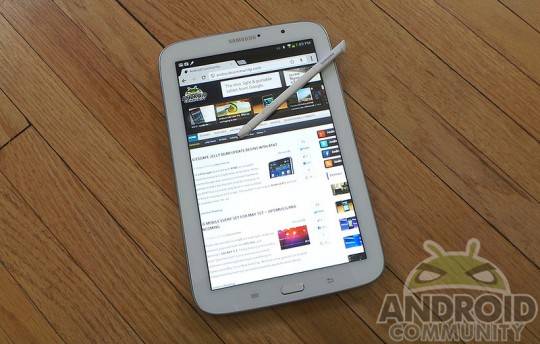 The WiFi only Galaxy Note 8.0 Kit Kat update has begun. The update is available over-the-air and by way of Kies, however for now it looks like the update is only available for those in the UK. A specific timeline has yet to be revealed by Samsung, however the update should be arriving for device owners in other markets fairly soon.

In the meantime, this particular update is bringing Android 4.4.2 for the GT-N5110 (Galaxy Note 8.0 WiFi). If you happen to be carrying this particular tablet and living in the UK you can sit back and wait for the update notification to arrive — or take the proactive approach and go looking. The latter could include using Kies or heading into the tablet settings by navigating to Settings -> About -> Software updates.

This update will bring Kit Kat and that means goodies such as the white status bar icons, full-screen album art on the lock screen, wireless printing support, improved battery life and performance improvements. Basically, the items we have come to expect from Kit Kat.