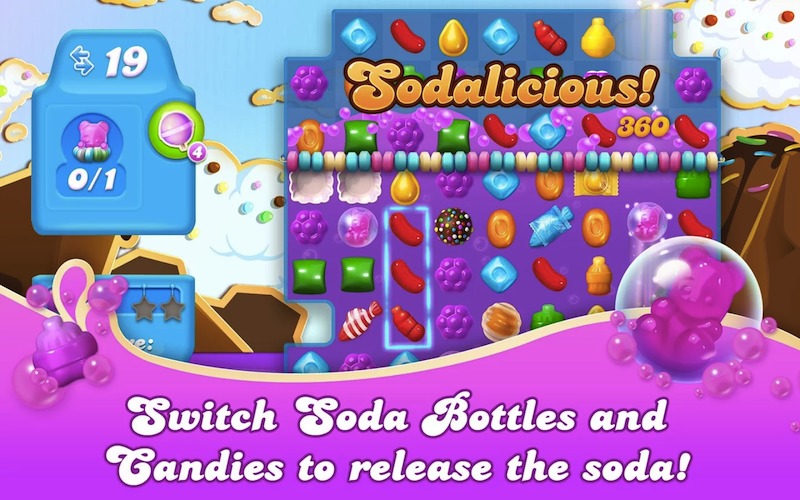 This is a new Candy Crush experience but is also set in Candy Kingdom where all things are sweet and now, sodalicious. Don’t just expect overflowing soda because new candies will greet and tempt you. All are mouthwatering and juicy with new kooky characters to be introduced along the way.

Candies are more divine than ever. Watch out for the purple soda and just drink non-stop in five new game modes. I’m guessing this will be as addicting as the first game you’d better prepare for those uncontrollable in-app purchases. (Take it from someone who spent more than $30 on extra moves—me!)

Our sweet friends Tiffi and Mr. Toffee will be joined by a new character named Kimmy. Together with them, try to finish all 135 levels. Lots of candies can be tasted but with the addition of soda surprises. Five game modes will be introduced at launch: Soda, Soda Bears, Frosting, Honey, and Chocolate.

Chief Creative Officer at King, Sebastian Knutsson said, “We’re excited to offer our players the chance to experience the next installment in the franchise now that Candy Crush Soda Saga is available on mobile devices.”

“We continue to be astounded by the global success of Candy Crush and the initial response to Candy Crush Soda Saga, since it launched on Facebook last month, has been positive. With the mobile launch, fans will be able to play the game anywhere, anytime, and on any device and we hope they have as much fun playing it as much as we have had making it.”

Will King have another moneymaker in Candy Crush Soda Saga? We’ll see if this is as addicting as the original mobile game.