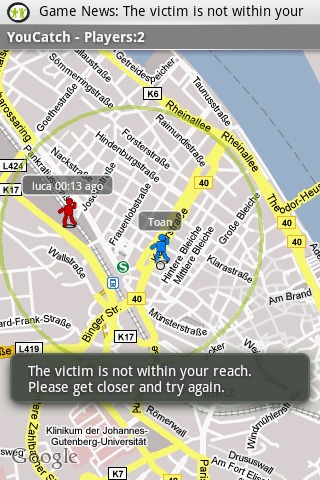 JOYity has brought social based gaming to a whole new level with Android. JOYity uses GPS to help users play adventure-based games with other people in the real world like it has never been done before.

JOYity is not one but three games in a single application. Once you download the application you can either choose to play YouCatch, Roads, San Francisco or City Race Munich or choose to design your own game. In Roads of San Francisco you have to follow clues all around the city. When you arrive at one location, a text or picture message tells you where to go next. The game is basically a Scavenger Hunt with a story line that can be played with several people.

YouCatch is a version of Manhunt in which players in the same proximity sign up for the game. Everyone acts as a hunter and the hunted, the game assigns you a person to hunt while assigning you to someone else as the victim. The location of everyone is periodically flashed on the map so you can locate others. When you get within 25 feet of your victim just press the scroll ball for the kill, the catch is your location is broadcast every time you press the scroll button. The winner is the last person left standing.

Below you can see two video reviews from AppVee of Roads of San Francisco and YouCatch. YouCatch is being played in Madison Square Park in New York City. AppVee was also impressed with this application saying that it is a “massive multiplayer trans-reality game.” What do you think about the new direction mobile gaming is going?