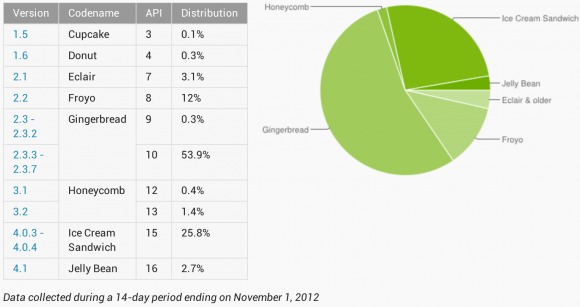 It’s time for the update on Android install bases again. It’s always interesting to see which versions of Android are growing, which ones are shrinking, and what percentage of Android owners are still hanging around with the old versions. The data from this report is generated based on devices accessing Google Play in a two-week period, which in this case is the period up to November 1. The story of this report is the incredibly slow growth of Jelly Bean, and the solid growth of Ice Cream Sandwich.

It looks like a good portion of those upgrades came from Gingerbread, which dropped 1.6-percent. In spite of this drop, Gingerbread devices still hold well over 50-percent of the install base, making it by far the most used version of Android. Older version fell too, but by a lower number. Hopefully, the trend of devices updating will keep those ICS and Jelly Bean numbers climbing.

Moving towards newer OS versions has to come from device manufactures, but with the influx of new devices hitting the market all the time, it’s tough for device makers to keep up. For example, Sony announced that all of its pre-2012 devices would not receive Jelly Bean updates. Situations like that are obviously not going to help increase Jelly Bean installs. Either way, it’s still good to see that at least more devices are moving the way of ICS, even if Gingerbread is still dominating.