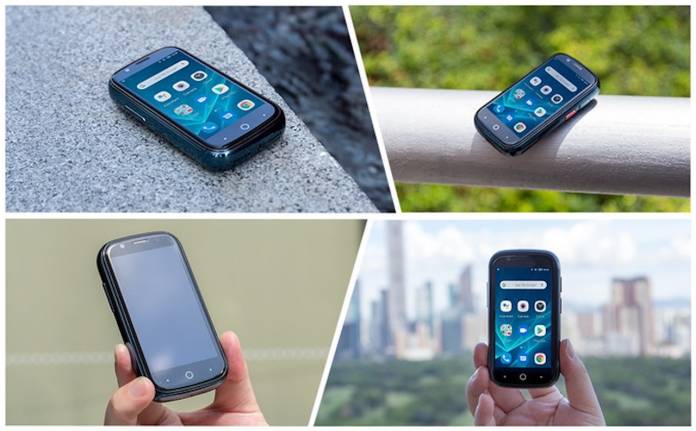 Three years ago, a project appeared on Kickstarter described as the ‘World’s Smallest 4G Smartphone’. We never doubted its capabilities but mobile technology has greatly advanced in recent years. The makers of Jelly phone want to try once again with a project called Jelly 2. It’s called the ‘World’s Smallest Android 10 4G Smartphone’ because it really is small and it runs Android 10. It’s the size of a credit card and already connects to 4G network just like the original Jelly phone.

The project is now on Kickstarter. Fund goal is only $50,000 but over $500,000 have been pledged already from over 3,000 backers. That is an impressive feat considering there are still 28 days to go before the deadline.

The group behind it, Unihertz, is offering this phone as its fifth-generation product. While major OEMs are coming up with smartphones with bigger displays and more premium specs and features, here is a team making a smaller device with only a 3-inch screen, GPS sensor, upgraded camera system, and longer battery life courtesy of the 2000mAh battery. This is a 4G mini phone that you can use as a secondary phone.

It’s not just any ordinary text-and-call brick phone. It’s a smartphone that is powered by Android 10. It connects to 4G fast whenever you’re out.

It’s actually best to use when you’re going out at night or you can give to your kid to bring a phone without having to worry about too much screen time. You see, you can’t do much on the 3-inch display but it can still allow you to access important apps. The screen is already bigger than the 2.45-inch display of the first Jelly phone.

The phone comes with a 16MP rear camera and an 8MP selfie shooter. Other features include a programmable key, global LTE support, NFC function, MicroSD Card Slot, Dual SIM Card support, and FeliCa Function but only for Japanese backers.