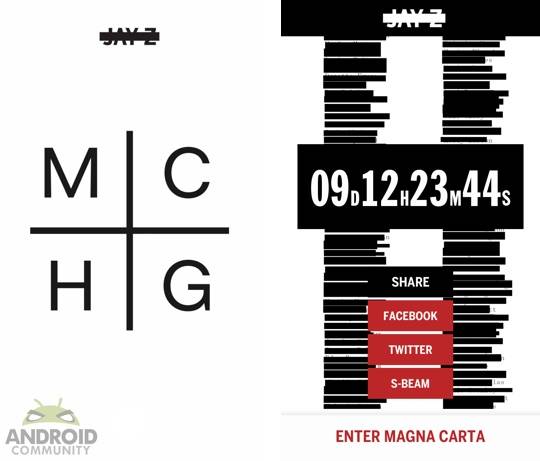 As we had been expecting, the Jay-Z Magna Carta app has arrived in the Google Play Store this morning. The app is available for those carrying one of three Samsung devices — the Galaxy S III, Galaxy S 4 and the Galaxy Note II and perhaps more important, it could mean a free copy of the album.

The free copy will be available for the first million people to download the app using one of those previously mentioned Samsung devices. Once the app had been downloaded and installed you can login using your Facebook or Twitter credentials and begin to get some Jay-Z related news.

We suspect some of the die-hard Jay-Z fans may have already seen some of these details, however the app offers a few videos including one that gives a Holy Grail preview. The key here, some of the goodies can only be unlocked by sharing. For example, there is a lyric page available but that can only be seen once you share it out on the network of your choosing. 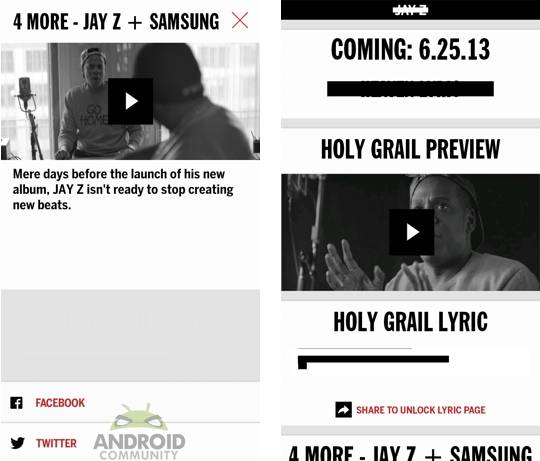 Otherwise, while the general release of the album is set for July 7th, those first million users will be able to access the album as of 12:01 on July 4th — a full three days before it is available elsewhere. This style of release is said to be a first of its kind. An earlier Wall Street Journal report had said Jay-Z is being paid $5 per album (for those first 1 million) and that bill is being covered Samsung.

Aside from the Jay-Z connection here, this is an interesting twist on an album release and one that we hope is deemed to be a success if for no other reason than it is something unique and hopefully something that will inspire other artists. Free albums are nice to get, but it is also nice to see things changing in terms of album releases. With that, the link to download is sitting below.