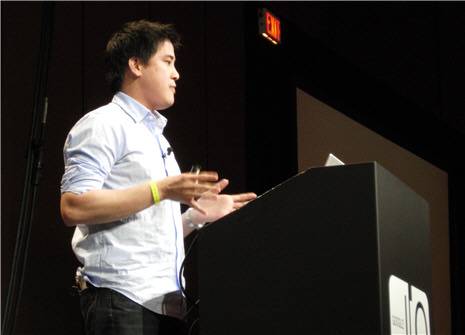 Right after the Google IO keynote on Tuesday, I rushed off to attend the press conference and as result missing the first few Android sessions.  It’s a good thing that Ed Burnette of ZDNet, we have a few more questions answered as well as clearing up some confusion regarding the Android platform.

The Introduction to Android platform session lasted around 90-minutes.  Jason announced that the source code to Android is currently available to Google’s Open Handset Alliance (OHA) partners.  The general public will get access to the source code when the first handset (that being the Android HTC Dream phone) ships.  At such time, Android will be called “Android Version 1.0.”  Android version 1.0 will be available to everyone and anyone who wants to download and port Android to any phone or any other devices they so desire.  Once Android version 1.0 hits the street, you do not have to be an OHA member and you don’t need to sign anything or ask for anyone’s permission to install Android on any device.  The audience wanted to know when will Android version 1.0 be available.  Unfortunately, Google would not provide any specific dates other than “the second half of 2008.”  When pressed, a Google source stated that it wasn’t really their call alone to make.  The release date is largely up to OHA members, especially manufacturers making the phones and the carriers who will sell and distribute the Android phones.  Lets hope all 31+ OHA members don’t take too long to decide when’s the best time to release Android version 1.0.

After his presentation, Jason opened up the floor for questions…

Q. What if somebody wants to build an application that is similar to a Java Virtual Machine (JVM) that can run other programs. What security implications are there for these kinds of applications?
A. It’s possible to do but we haven’t thought about it. There is a large security team working on Android. There are languages that are working to port their bytecode to the Dalvik VM, so it won’t just be for the Java language.

Q. Traditionally carriers rip out things. What steps do you take to prevent somebody like Cingular from making an “almost-Android” phone?
A. They could do that if they wanted because it’s open source. But Android is a complete stack of software so why would you want to break it? There’s value in a full stack and in a lot of applications. There’s no incentive to alter it in ways that wouldn’t be compatible. We want manufacturers and operators to customize in ways they can differentiate. They don’t all have to have the same home screen, the same look and feel, and so forth but they should be able to run any Android apps.

Q. When do developers get hardware?
A. When everybody else does (when retail phones are for sale).

Q. Does Android platform development follow the JSR (Java Specification Request) model?
A. Android is not Java technology. It uses the Java programming language but Dalvik is not a JVM. It’s not claiming to be Java tech.

Q. Is support for Flash lite planned?
A. Not at the moment.

Q. Will there be an SDK for PPC Macs?
A. Don’t think so. Just Intel.

Q. Will you have aesthetic standards like the iPhone?
A. We’re working with UI designers to put out a user interface guideline. Also android provides standard UI widgets.

Jason is currently a developer advocate at Google where he works on ensuring that developers for the Android platform are successful. He previously led the developer support team for Google Checkout. Prior to joining Google, Jason worked at IBM and Urchin Software.