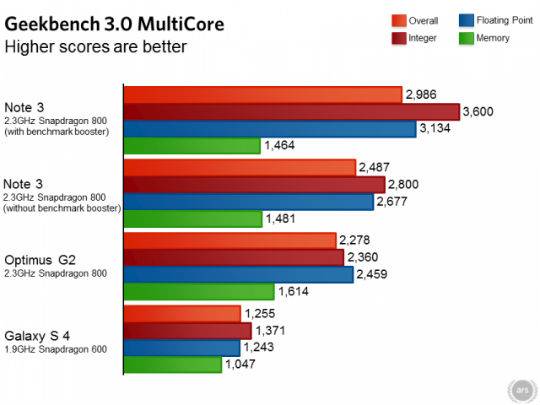 Like the Galaxy S 4 release, Samsung has once again been accused of cooking the benchmark books. This time it’s with their Note 3, and they may have been caught red handed. Ron Amadeo of Ars Technica dug through some Samsung code and found something very unusual, and a bit troubling.

In his research, Amadeo found a file named “DVSFHelper.java” on the Note 3, and it’s pretty damning evidence of Samsung juicing their devices when they notice they’re being benchmarked. Within the code, there was mention of all major benchmarking tools; Geekbench, AnTuTu, GFXBench, Quadrant — even some Samsung benchmarking tools. The functions applied to them were as follows;

Both seem to suggest that Samsung is removing the natural redline a processor or GPU sees during normal use.

Amadeo went on to create a shell game of sorts for the Note 3, recreating Geekbench to hide the name. He renamed the app Stealthbench, and proceeded to use it on the Note 3. While the device still performed well, it didn’t come close to the success it had during Geekbench testing, even though they were exactly the same test.

Over at SlashGear, however, we’re seeing that Samsung is not the only culpable party. In testing out various devices, they found quite a few devices from a variety of manufacturers are putting their best core forward in benchmark testing. From HTC to Samsung to LG, the problem was widespread. While they didn’t poke through code as Amadeo did, the proof is in the results: all or most cores at full throttle, when they aren’t necessarily doing so under normal circumstances.

The real question now is not whether or not Samsung is “cheating”, but whether we should even bother with benchmark testing at all. Samsung may be besting everyone else at altering the results, but they’re clearly not the only ones with some kind of benchmark end-around play.