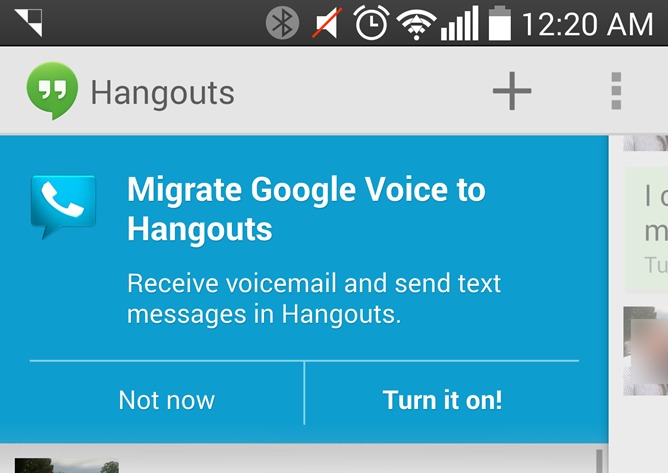 In what may be the logical conclusion to this story, several Google Hangouts users have reportedly been receiving prompts to migrate their Google Voice to the messaging service. However, there has been no official announcement from Google yet, and even if you choose to “turn it on”, it’s still not working properly which may mean the process isn’t complete yet or this wasn’t supposed to happen yet but someone pushed a button already.

This move is something that has been hinted at in several of the recent updates for Hangouts and makes perfect sense since most messaging apps integrate both text and voice functions. However, we are not sure if this is something that was supposed to happen as early as now, since it seems to not be working properly for now. If you turn on the migration, voice messages sent to Google Voice appear but once you click them, you won’t be able to listen to the actual message in Hangouts.

You will receive a message that says “via GV” but there is no option to choose which number you can reply with. The Voice app also will not be able to receive messages anymore once you accept the integration option and the site says that all texts and voicemails will now go to Hangouts directly.

The migration prompt has previously appeared a few months ago, but it turned out to just be a debugging option. This time around, it seems to be the real thing, except that it’s still not working as it should be. But since it hasn’t been pulled out yet as of this writing, we can assume that the problems will eventually be ironed out, probably during Update Wednesday.