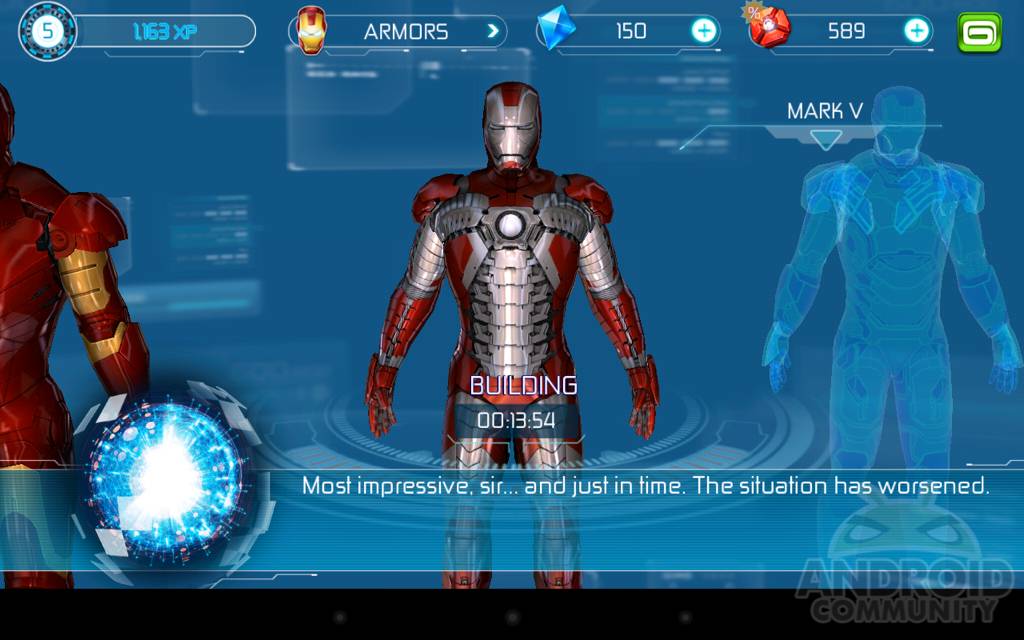 Get ready to suit up for tons of explosive action and snarky Tony Stark attitude, as the folks from Gameloft have just released Iron Man 3 the game for Android. The game is absolutely free, so what do you need to know? For starters it’s full of in-app purchases, and is almost 800MB in size so might take a while to download. Check out our hands-on pictures, video, and game thoughts below to see if it’s worth it.

We’ll start with one of our favorite quotes from Tony Stark. “I’m a Genius, Billionaire, Playboy, Philanthropist!” You’ll be playing Tony Stark as he battles A.I.M. forces from around the world. The game is played as an endless runner, like Temple Run, only you’ll be shooting and blasting enemies with an arsenal of Stark Industries weapons.

The movie hits theaters May 3rd, and we’re a bit excited to see how it is, and the game is said to follow the comic and movies somewhat closely. So we’ll have to update later and see how Gameloft does in that regard. As we mentioned above, the game is 790MB in size, and takes an additional 15 minutes or so to download and play. If you’re low on a data plan you might want to get this at home on WiFi. Check out the video below to see if it’s even worth it.

That was just a very quick look at the initial start and first level of the game. From there the action actually really picks up and it gets quite fun. I was rather pleased with my first 15 minutes of Iron Man 3, even though the in-game graphics aren’t as good as we hoped. However, the explosions are quite good, and the controls are decent. And yes, you can use the gyroscope and control the game by tilting your tablet or smartphone. I had to lower the sensitivity though, it was a bit extreme out of the box.

Now, lets talk about in-app purchases. This game is free but follows the freemium model so you can enjoy it at no cost, but really enjoy it and power-up, add more armor, get better weapons and more if you choose to purchase more stuff. The in-app purchases are pretty extreme too. Going on the record here. There’s an in-app purchase of $99.99 USD. Yes, nearly 100 bucks. That’s just ridiculous. On the bright side that will get you the billion dollar Stark Highrise Tower from the movies. If that’s your thing. 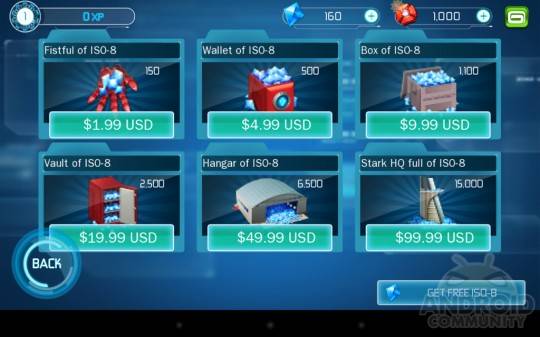 Actual gameplay is extremely fun and I found myself enjoying it more than I thought I would. At first it wasn’t much, but after you get more weapons and past the 10,000m mark the game really picks up. You’ll be dodging street signs, trucks on the road, jets in the sky and blasting enemies. Then trying to dodge incoming fire while sliding your finger on-screen to fire missiles at targets becomes a bit of a challenge. There was no lag whatsoever, but I did get the occasional lag when in-between sessions the game gives you an ad for other apps and games, which is a bummer.

All the terrible in-app purchases aside, the game has some unique (and irritating) ideas that makes it rather unique. You can earn XP points to buy any of the 18 different Iron Man suits available. Sadly after you purchase it, you have to spend coins earned during the game to actually build it. So yes, Gameloft is double dipping in your pocket. You’ll likely end up giving them some actual money to build up suits faster. Weak! 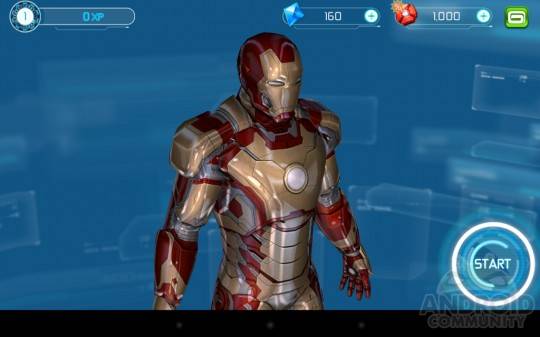 Then the cool yet irritating feature is the suit then takes time to build. It isn’t magical here guys, and Jarvis has to build your newly purchased Iron Man suit. The second one in game takes roughly 14 minutes to build. While waiting go for another flight and earn more coins, XP, and get ready to buy additional weapons. You can skip the wait time, but again, this costs diamonds which are even harder to get in the game. 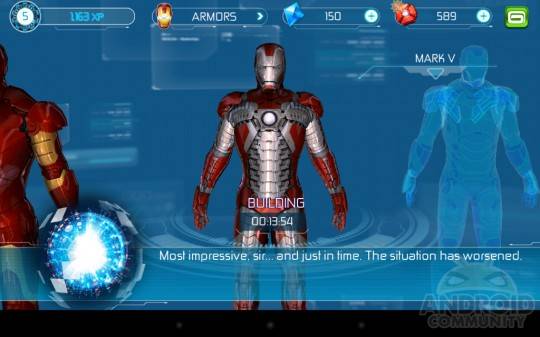 So in the end Iron Man 3 for Android is actually extremely fun. It’s a fast-paced action endless runner full of 3D graphics, and the sound track is pretty epic. The game has soo many different power-ups, new suits, and options like buying the Stark Tower that you could play it for days and days. It’s a good approach for those who love to dive head first into a game, but casual gamers will probably lose interest thanks to truckloads of in-app purchases all over the place.

Give it a try from the link below and expect to either love it, or get bored trying to earn enough to get additional suits and weapons that you either give up, or cave and spend some actual money.