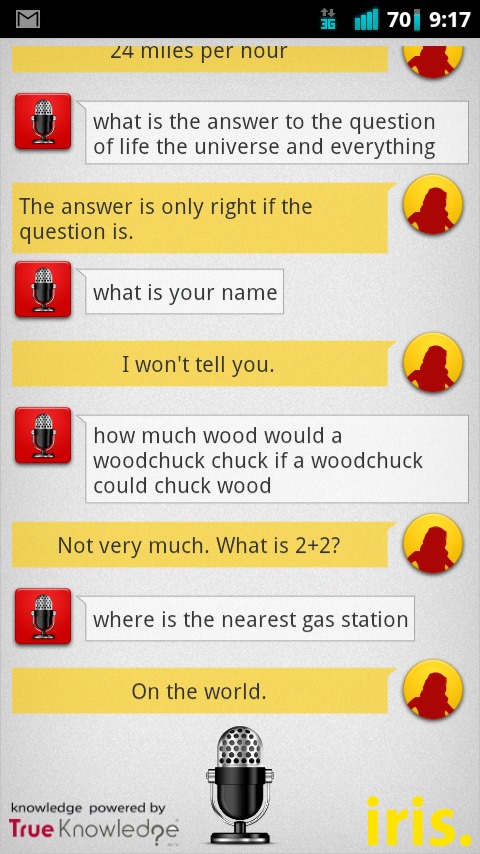 Even though most of the “new” features in Apple’s iOS 5 can be easily replicated by Android’s built-in features or free apps, it’s hard to deny that Siri is an impressive piece of tech. The natural language engine wowed consumers and press when demonstrated on-stage, and is honestly a lot more exciting that the iPhone 4S’s lukewarm hardware improvements. At least one developer has been inspired to create his own version for Android. It’s called “Iris,” and the alpha version is available in the Android Market right now.

Iris isn’t a true Siri competitor – in fact, it’s not even as useful as Google’s own Voice Actions (which, by the way, can replicate most of Siri’s functionality in a less user-friendly way). It uses search algorithms to try and immediately answer queries, not unlike a voice-powered version of the old Ask Jeeves or WolframAlpha. While Iris can handle easy questions like the current time or some universal pop culture references, complex problems stumped it. For example, it couldn’t direct me to the nearest gas station or tell me when the next Aggie football game would be played.

Developer Dextera claims that the first version of Iris was made in just eight hours, and on that note, it is impressive. If it can integrate into other Android services and APIs, it might even begin to look like its iPhone inspiration. IN the meantime, it’s a free download, so there’s no harm in giving Iris a try or sending some feedback in.