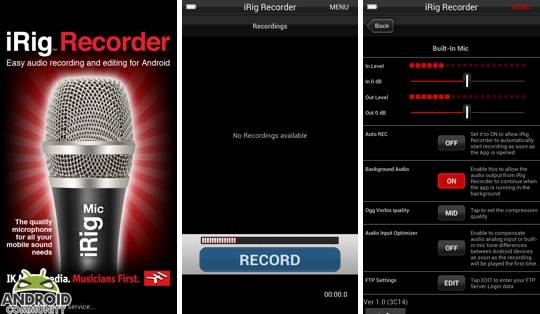 Those looking for a solid audio recording solution on Android, or those who may have been upset about the iRig recording app only being available for iOS users — your time has come. The iRig Recorder app has officially found its way into the Google Play Store. The app is available for free, however it does have an in-app purchase available for those looking for the complete feature set.

That is not to say the free version will be lacking. In fact, we suspect that it will be good for the vast majority of users. IK Multimedia US notes that the iRig Recorder app is a free app that comes with “full recording features” and “complete file-transfer and export functions.” Taking that a step further and you can get one effect unlocked for completing the registration. Even further out and you have the “All Functionalities Bundle” available for $4.99.

The iRig Recording app can be as easy or in-depth as you desire. That is to say you can launch the app and begin recording and editing. Or on the flip side, you can use it as a companion with some of the iRig gear including the iRig MIC and iRig MIC Cast. Some of the features include one-touch recording and an optimized volume effect (this is the one you unlock with registration).

Those using the iRig Recorder app will be able to export to .ogg or .wav and only find their recording times limited by the amount of storage on your device. And rest assured in knowing that you can record to internal memory or a memory card. That said, the iRig Recorder app is currently sitting at v1.0 and has arrived with support for devices running Android 4.0 or later.