Intel isn’t just about chips and processors. At the Intel Developer Forum, the company showed off a new prototype identification bracelet that could be a game-changer when it comes to password management. It’s a band that can easily be worn on the wrist. It was showcased on stage working with a computer running the newest Windows 10.

The Intel bracelet is just a prototype so don’t expect it to be released anytime soon. It’s not even ready for production yet according to the company but the idea is for the wearable device to be recognized by a nearby computer. Logging into one’s account could be automatic. Of course, there is still the risk of the ID bracelet being stolen but the security token could easily be deleted. If found, new password must be entered again for it to work.

This is something like a laptop recognizing a previously paired smartphone when nearby for identification. Intel hopes to bring this concept to other industries or maybe use it in a “smart home” or for anywhere where access control is needed. Say for example, a door recognizing the ID bracelet for a keyless entry. 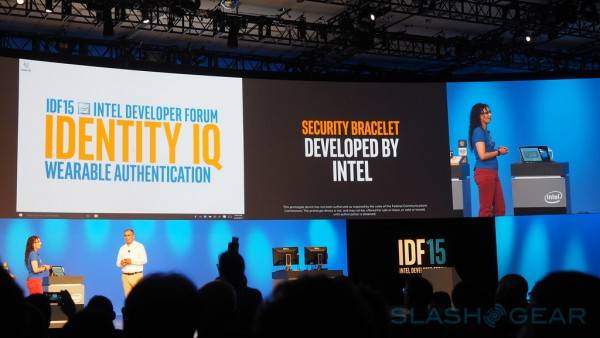 With a simple Identity IQ API which is one part of the newest Intel Curie, a platform can be built for the next-gen devices of wearable and embedded technologies. Let’s see how Intel plans on delivering this concept. It’s one great idea and I’m pretty sure other companies would immediately work on their own or similar versions.