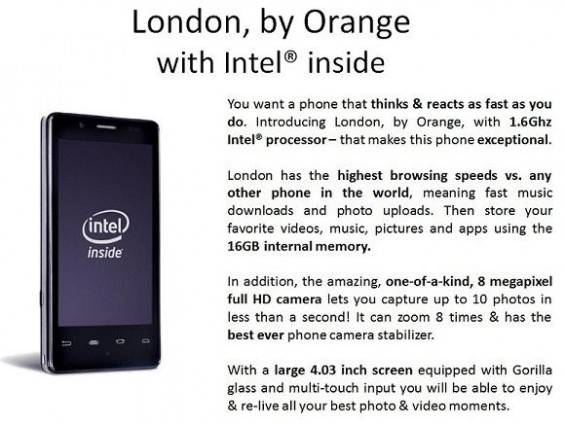 Intel is preparing to make a big splash in the world of Android over the next few weeks and months with Medfield. We have a feeling we’ll be seeing plenty of them at Mobile World Congress in a few weeks. Today new reports are coming out of an interesting but awesome sounding phone for Orange UK ingeniously named the London.

Most of the details remain unclear with nothing more than the above shown screenshot — which may or may not be fake. According to Coolsmartphone it was sent to an Orange subscriber after he completed a survey so we’ll take this with a grain of salt. It also looks to be a phone branded by Orange themselves but could easily be manufactured by LG or Huawei from the looks if it.

The interesting part is some of those crazy specs. The Intel Medfield mobile platform has a powerful 1.6 GHz processor and we know that, but the 8 megapixel camera capable of 10 pictures per second sure sounds impressive. Not to mention the best ever phone camera stabilizer and 8 times zoom. For now we don’t have any further details regarding this phone and it’s the first we’ve heard of it. We can expect plenty of Medfield devices to be on display at MWC 2012 so we’ll keep you up to date with anything and everything.

Do you have more details on some Intel Medfield devices? Feel free to drop us a comment or a tip!