Based on their 22nm Silvermont architecture, Intel’s BayTrail processors have a lot of promise. Traditionally a PC chipset manufacturer, Intel recognizes the growing shift toward mobile devices, and is planning accordingly. In an attempt to get their BayTrail technology noticed, Intel allowed Engadget to benchmark the processor on an Android reference tablet.

Intel allowed their highest specced processor to be tested, which is the quad-core Z3770. According to Intel, that processor is capable of speeds up to 2.39GHz. It also has an Intel HD Graphics engine at 311 MHz. This stands in nearly direct competition to the Qualcomm Snapdragon 800, a SoC offering nearly identical prowess. The Adreno 330 and Krait architecture often clocks in at well over 2 GHz, as more and more newer phones are seeing. The Snapdragon lineup is already well implemented, and well received.

The results from the Engadget test, which you can see below, show that the Snapdragon 800 is on par with the BayTrail at just about every turn, and the differences are often minimal. The real difference is that the Snapdragon is ARM architecture designed for mobile devices, and Intel is not.

As Intel prepares to enter the mobile space, they’ll need a chipset that can keep up. While the BayTrail certainly test well, benchmarks often aren’t the whole story. There is battery life to think of, as well as software implications. The tests are a good sign, but we’ll have to see it in a few real-world situations first. 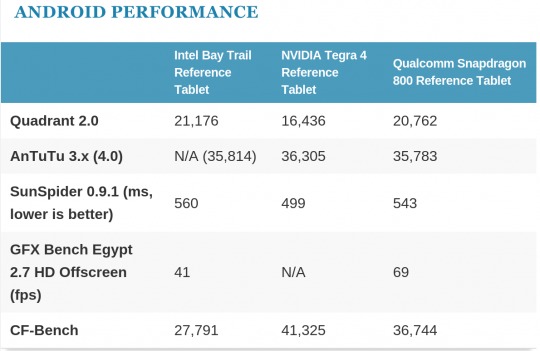