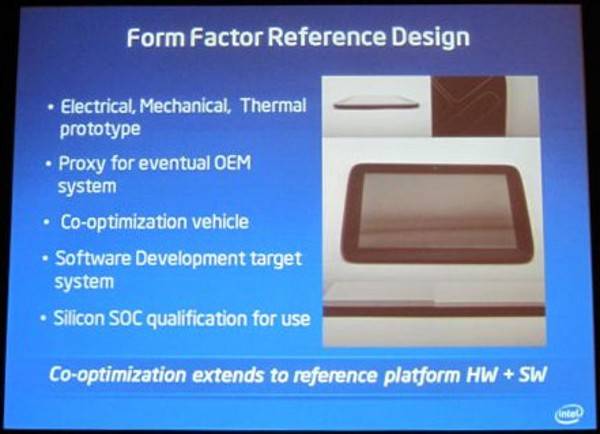 The popular chip maker Intel that I like to call chipzilla is preparing their own mobile processor or SoC (system on chip) called Medfield that we all have probably heard about a few times. They’ve shown off a prototype device too and more details on that are below. Today we have some leaked specs and benchmarks that are actually quite impressive that put this new Intel mobile processor right up there with NVIDIA’s Tegra 2 and Qualcomm’s dual-core chipsets. More competition the better right guys?

Intel may still be a ways off from launching Android smartphones and tablets but being fully supported by 4.0 Ice Cream Sandwich they are headed in the right direction — and now we have specs and performance ideas to help our minds wander with the possibilities. Apparently VR-Zone got all the info on Intel’s first true attempt at a full out SoC and we have all the details.

The 1.6 GHz x86 Intel mobile processor was running on a reference design 10″ tablet with 1GB of RAM, 16GB of storage, WiFi, Bluetooth, camera’s and all that other usual stuff, and was tossed up against the current big dogs like the Tegra 2. Apparently they ran a few Caffeinemark 3 benchmarks and the higher clocked Intel Atom scored around 10,500 while the Tegra 2 hit 7,500 and Qualcomm’s 1.5 GHz dual-core racked up around 8,000 points.

Currently the power consumption was higher than wanted or anticipated and that could cause a problem with battery life obviously. Intel plans to cut that down a bit and make some strides in efficiency not to mention be launching on Android 4.0 ICS devices later next year. I’m sure we’ll be seeing more than a few production units at CES 2012 so stay tuned as our entire team will be there live.

A processor company as huge as Intel running on a wide array of Android devices could be a game-changer if done right so we’ll continue to monitor and update as we hear more.