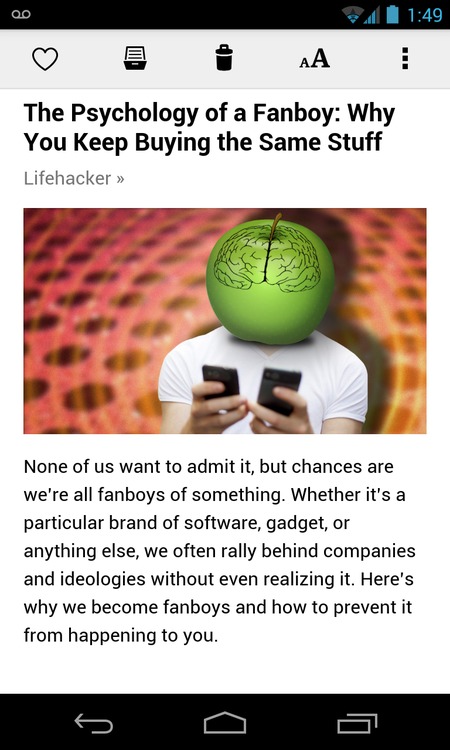 It took some time before we saw Instapaper arrive in the Play Store. And when the app did finally arrive, it landed not only as a paid app, but as one with quite a bit of competition. That said, the app does have an audience and ever since Betaworks purchased Instapaper and updated the web and iOS versions — we had been on the lookout for a similar Android update. Well, that time has come.

The latest Instapaper update has arrived in the Play Store and while the price tag remains at $2.99 for new users, existing users will be able to grab it for free. In terms of the update, things begin with some design changes and some new features. The Instapaper Blog makes mention of “classic Instapaper touches” such as pull-to-refresh and video support along with new tools for sorting, filtering and in general, managing your queue.

There are also new ways to paginate your articles. Users can now use left/right swipes to move from page to page. There was also mention of how they focused on improving navigation. For this, that meant easy access to saved content and some new features including a redesigned sidebar along with an action bar menu for sorting and filtering.

You can now sort your unread items by popularity, date and article length. Users will also notice a shuffle option that pulls up a random article from your queue. Otherwise, Instapaper users now also have the ability to preview links in a built-in browser and search. Though, the ability to search is not a free part of the update. That one is available only with an in-app purchase.

Finally, this update was done for those using Instapaper on smartphones. While there was no timeline given, there was mention of an “improved” tablet version being in the works. That one is expected to bring additional social and sharing features, performance improvements and more.