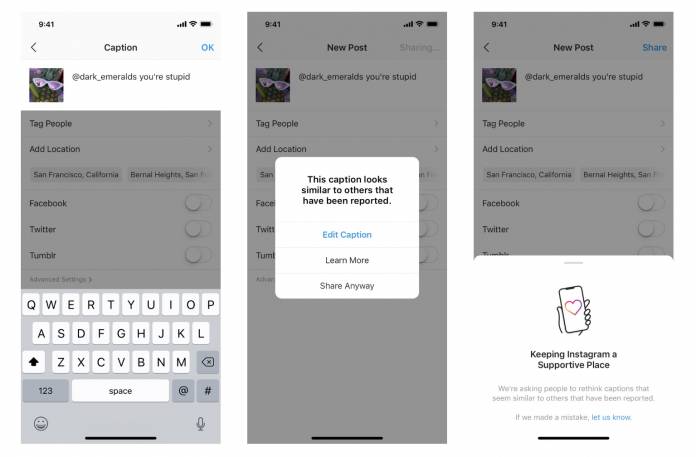 While some people probably go to Instagram to escape the toxicity of Facebook or Twitter, this social media platform can also be as problematic. There are a lot of posts and comments that can be damaging to people as well. They have recently announced that as part of their campaign against online bullying, they are introducing a feature to help people think before they post. You will now get a notification when your caption on the photo or video may be considered offensive.

Part of Instagram’s commitment to fight online bullying is to develop an Artificial Intelligence algorithm that can recognize the different forms of bullying on the platform. Previously, they launched a feature that would warn people that the comment they were posting may be considered offensive. They said that the “results were promising” but did not give specific numbers if this was able to curb at least a portion of all those bullying comments you see on a daily basis.

Now they’re expanding it to even the captions on the photos or videos that you’re posting. If the AI detects that it is “potentially offensive”, you’ll get a notification saying “This caption looks similar to others that have been reported.” You will then get the option to edit said caption or Learn More about why it’s considered offensive. But if you think there’s nothing wrong with what you were going to post, there’s a Share Anyway option there.

Instagram says that this feature is double purpose. Not only will it hopefully help lessen cases of online bullying on the site, but it also serves as an educational tool for what they allow or don’t allow on the platform. Well, that is if people will tap on the Learn More button rather than just the Share Anyway one. We would eventually like to see numbers from them to gauge whether this is an effective tool of course.

The feature is rolling out to selected countries for now, although they did not specify which ones. We won’t suggest trying to post something offensive to test this out of course. They will be expanding it globally over the next few months.