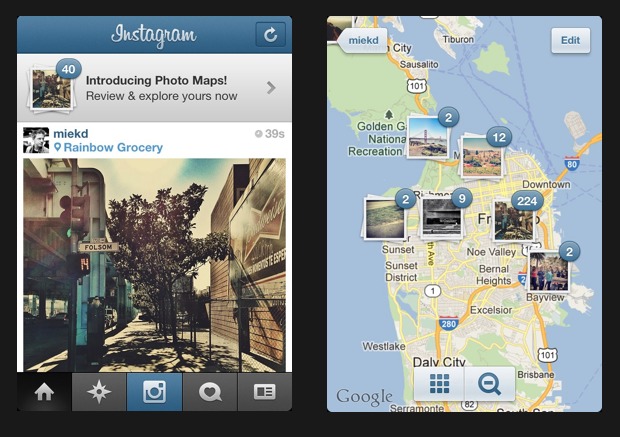 Who’s ready for more amateur photography? The creators of Instagram (now owned by Facebook) have just issued a rather large update to their extremely popular application bringing some neat new enhancements and features. Their new feature called “photo maps” will probable be popular so lets take a peek.

Now users that geo-tag or add their location to photos can check them out on a map and see where they’ve been taken. This is great for vacations, trips, or people that travel a lot in general. Your followers can also see too, so use caution. Being able to see where your friends go and where an amazing photo was taken is a great feature.

Next up is infinite scrolling. Previously you had to scroll the the bottom of the list, then tap the pesky “load more photos” button that always took far too long. Now they’ve added infinite scrolling where it will auto load content. A simple but much wanted feature, so give it a try. Check out the video below.

Finally, the last thing is speeeeed. This goes hand in hand with the new infinite scrolling feature, as photos now load extremely fast. With millions and millions of users speed has always been an issue, but now that Facebook has control on the backend we can expect things to hopefully get better — although judging their Android app I have my doubts. Get it right this minute on the Google Play Store.