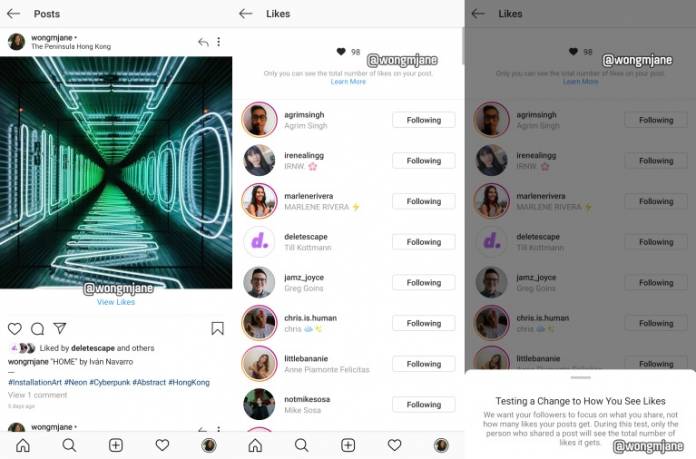 We’ve seen a lot of articles warning us on the dangers of apps where how many likes you get on a post can sometimes dictate what you post or worse, how you feel about yourself or others. It looks like Instagram is taking things like this seriously as they now seem to be testing a new design change that will not let your followers see how many likes you’re getting on a post. It may be a small change but it has the potential to change how we view these likes, hopefully for the better.

Noted tipster Jane Manchun Wong was the one who spotted this design change inside the Android code and shared it to Tech Crunch. You get a notification that only you will be able to see the total number of likes of your post because they want your followers to be able to focus on your post alone and not how many likes it will get. They will be able to see a few faces and some names of those who liked that post but not the total like count.

The purpose of this possible design change is to lessen the “herd mentality’ where people like a post because a ton of other people have liked it already. It can also affect the tough competition that users, specifically influencers battling for eyeballs and brands, have when it comes to comparing their like counts with other creators. Some users even delete posts that don’t get many likes as it affects their self-esteem when they see that a post is not getting enough love.

It’s not just Instagram that is affecting user’s psyches. Twitter also began testing a design that would hide the retweet counts to discourage a similar herd mentality that exists on the platform. One of the advantages of Snapchat is that it has never shown like counts and follower counts, which is good for users but not so great for influencers who want to prove they have the reach.

There are also some other things that Instagram may be testing soon that has nothing to do with this possible design change. Wong has spotted things like chat thread stickers for DMs, the ability to use AR filters during Direct Video calls, lyrics synced to soundtracks used in Stories ala karaoke, emoji reactions to feed posts, and a shopping bag for commerce. Only time will tell if any of these make it to the final build.