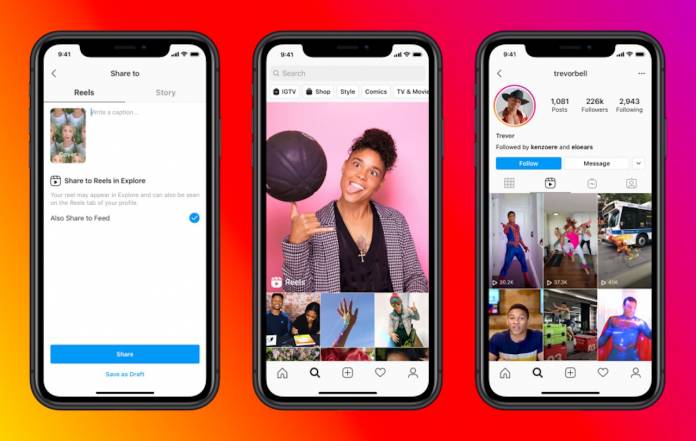 As Americans try to prepare for life without TikTok (probably), Facebook is waiting in the wings, offering up their own version of the popular social app. Well, actually, they’re not waiting anymore as they have officially rolled out Instagram Reels to more than 50 countries globally, and of course it includes the US. For now it’s not a separate app and is embedded in Instagram. If we see the same early success that they had with the Snapchat “inspired” Stories, we may see them push Reels really hard.

It’s hard to discuss Reels without comparing it to TikTok so let’s get that out of the way first. Yes, it is most likely “inspired” by the Chinese-owend viral video app. But Instagram Reels actually doesn’t have its own standalone app and can be found within the main Instagram app. At the bottom of your Instagram Camera, next to Story, you’ll see Reels. There are some creative editing tools like adding a song, AR effects, Timer and Countdown, Align, and Speed. Most of these should be familiar to those who use TikTok.

If you’re aiming to become the next Instagram Reels superstar, you can share your content in the Explore section if you want others to discover you. And if you use certain songs, hashtags, or effects, discoverability can also be high for those who are searching for related posts. But if your account is private, it will respect your existing privacy settings. After you share your reel, it can be found in your main profile grid and in the Reels tab on your profile. You can share it in your Story, close fiends, or just a direct message.

Now if all you want to do is just watch Reels, the Explore section is the place to go. There’s a dedicated section there with a vertical feed and you can interact with it just like you would any other post. There are Featured reels that is curated by Instagram to promote original content. If one of your Reels is featured there, you’ll get notified. But if you’re just a lurker, hopefully you’ll get enough content to check out.

Instagram Reels is now rolling out in more than 50 countries. With U.S. President Donald Trump hell bent on getting rid of the Chinese-owned TikTok (unless Microsoft makes the purchase), Facebook would want to get users to come over to their platform or to get a totally new market that are interested in TikTok but don’t want to get TikTok.