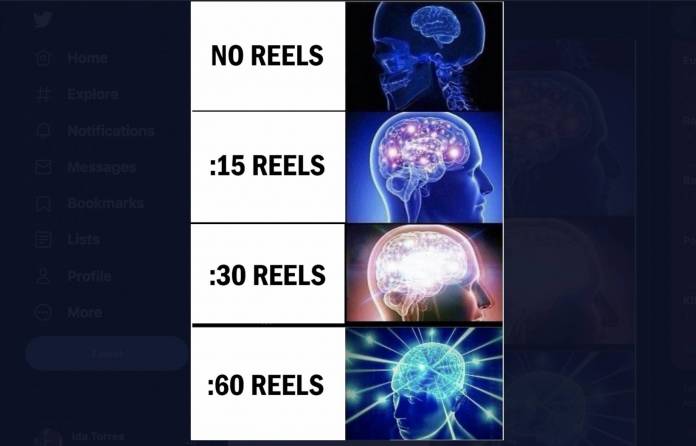 If you think 30 second videos are too short for whatever you want to say, show, or share, well you’re getting 30 seconds more if you’re on Instagram Reels. They announced that support for 60-second videos on the platform is now available for those who want to cross-post their TikTok videos, we mean, who want to post their own short-form videos. The update also lets content creators in several countries add a caption sticker to automatically transcribe their audio to text.

Appropriately enough, Instagram announced the update on Twitter with the popular “Brain Expanding” meme showing the expansion from No Reels to 15-second reels to 30-second reels to the new current support for 60-second Reels. No explanation is needed for those who understand what that means. Well even if you don’t get the meme, the brief caption explains it all. “Reels. up to to 60 secs. starting today.” the Tweet reads.

This will be useful of course to those who can’t get their video message across in 30 seconds and those that want to cross-post their other videos on Instagram. There are a lot of short-form video features and apps out there now so it’s good for content creators to cross-post if they want to earn from their posts. YouTube Shorts and Snapchat’s Spotlight also support 60-second videos while the OG TikTok recently made it possible to upload 3-minute videos.

Reels also now lets users add a caption sticker if they want their audio to automatically be transcribed to text. This will be helpful to make the platform accessible to those who are deaf or hard of hearing and also. for those who want to view the videos without the sound on. However this feature is only available on selected countries, particularly the English-speaking ones. They will expand to other countries and languages as well.

Instagram has said that they don’t want to be known as just a photo-sharing app. And with the emphasis on things like Reels, Live, and other video and audio components, they seem to be intent on going into this growing market.