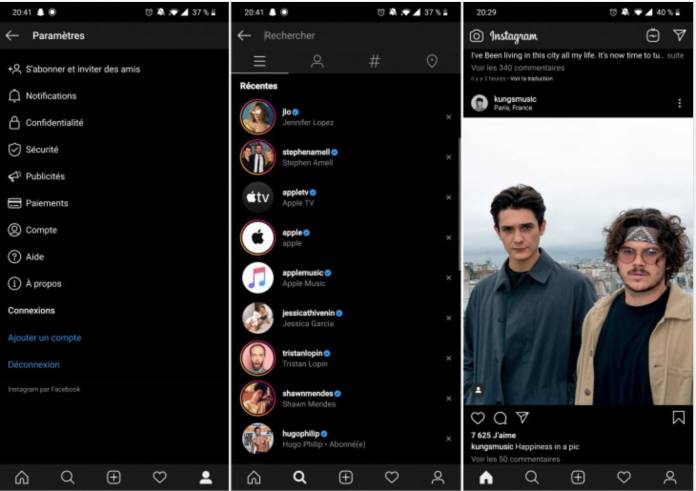 With all the apps scrambling to lessen the strain on their users’ eyes by lessening the white design, it was only a matter of time before social media apps began rolling out their own dark modes. It looks like Instagram may be testing out something to that effect to match Android 10’s system-wide dark mode. Samsung users are also reporting that they are seeing the dark mode on their One UI night mode even if their phone is running on an older version.

Apps like Instagram have always been overwhelmingly white at times but now that developers are seeing an increase in requests to have a dark mode option, we’ll probably see it sooner rather than later. Some phones that are running on Android 10 are now seeing a black and grey interface on their Instagram app whenever you switch to the system dark theme. Obviously, there are only a few who are already on Android 10 so not a lot will probably be part of the test group.

But it looks like older versions of Android may also be randomly picked as part of the dark mode test, according to Android Police. Some Samsung users who are still on Android 9 Pie have reported that if they turn on their One UI night mode, they’re also seeing the dark mode on Instagram. The only problem here is that there seems to be a bug ruining the experience as it is hiding the status bar icons. But at least your eyes and your battery are getting a break from all that white.

If your device is already on Android 10, you can try installing the beta version of Instagram or the build on APK Mirror to check it out. But if you don’t want to go through all the hassle of side loading it or something, you should probably wait until the dark mode officially comes out.

Android 10’s system wide dark theme is one of the more anticipated features of the latest Google update. It will take months probably to roll it out to all users but it’s still good news to know that feature will be coming soon to your eligible device.