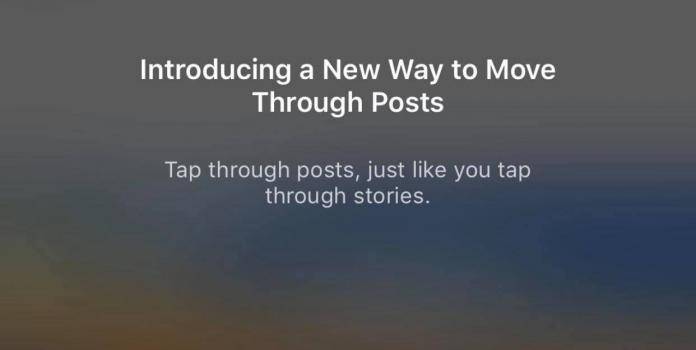 Instagram may have been just testing a new thing out and “accidentally” had a massive roll-out, but boy oh boy, did they hear it from the Internet. People were furious that their ‘Gram suddenly introduced horizontal scrolling, more akin to Tinder than to what we’ve been used to. According to head Adam Mosseri, this was just supposed to be a small test but it looks like they have their answer as to whether or not it will be received well.

Those who updated their Instagram accounts thought it was just a regular update that will introduce a new feature. Lo and behold, when they opened their apps, what they saw was a note said they were “introducing a new way to move through posts”. It replaced the vertical scrolling that we’ve been using since it launched. What people saw was horizontal tap-to-advance scrolling that was a bit befuddling.

To say that people were not pleased was an understatement. Within a few minutes of its roll-out, you could see people complaining about the new look on Facebook and Twitter (and on Instagram as well). Then the memes and hashtags started appearing, with some even riding on another late-comer meme from Netflix’s Bird Box movie. Google searches on how to “unupdate” Instagram started spiking, even though obviously there’s no such word.

The Instagram response was immediate, although some doubted that that was the actual story. Mosseri started replying to some people that it was supposed to just be a small-scale test but a bug inadvertently released the update more massively than they intended. They immediately rolled back the update and users simply had to close the app and when they re-open, everything should be back to normal. “We apologize for any confusion,” a spokesperson said in their official statement.

Well, whether it was a bug or they simply had to pull back because of the backlash, Instagram has learned a valuable lesson here: that people would not welcome a horizontal scrolling change. They might have to think twice about rolling it out anytime soon. The idea was probably to mimic how we scroll through Stories, which is apparently now more popular than the feed. Let’s wait what’s next in this Instagram saga.