The Samsung Galaxy S9 may not be all that different from the previous flagship (which caused some frustration with Samsung fans expecting something better), but one of the things that it’s been using as a marketing tool is its augmented reality emojis or AR emojis. It’s often been compared to the Animojis that Apple’s iPhone X first introduced to the market but there are major differences between the two (which we’ll tackle later on). And now with the latest update, Samsung has the edge over its erstwhile rival since they were able to get the license to have AR emojis for the upcoming sure-to-be-blockbuster Incredibles 2 from Disney Pixar.

Disney and Apple have always had a pretty good relationship so it’s surprising that Samsung was the first one out the door with an Incredibles 2 tie-up. It’s probably not an exclusive deal and Apple users may see some movie tie-in stuff on their iPhones and iPads, but for now, the Korean OEM has the advantage over them. Well, at least when it comes to having a Mr. Incredible, Elastigirl, Violet, Dash, Jack-Jack, and Frozone customized AR emoji. Disney has also previously partnered with them with the Mickey, Minnie, and Donald AR emojis but now you get to become any of those Incredibles characters. Even if the movie is still a couple of weeks away, you can already start having fun.

Now as to the difference between an AR emoji and an Animoji, on the surface they’re the same. They give users the chance to turn themselves into an animated emoji for the sole purpose of making your conversations with loved ones more personal and more fun. You can share them through messaging apps or even social media. The difference is that the Animoji uses the iPhone X’s multi-camera array to map your features onto an existing emoji while the AR emoji just uses a few software tricks and your device’s front-facing camera to map your face onto an emoji. The latter has more customization options as you can pick your skin tone, outfit, hairstyle, hair color, and even if it should be more life-like and cartoony.

There are also rumors that Samsung may actually be developing video call technology that can use AR emoji. It’s not actually just for fun but it’s for those who don’t have that great of an Internet connection but would still like to have a video call with a family member or friend. They were able to receive a patent that they filed for back in 2013 which will use a “3D mesh model” of the user’s face instead of their actual image. Of course with the current Galaxy S9, you won’t be able to do that but if the rumors are true about the Galaxy S10 and its 3D camera, then this tech is very much possible.

But for now, you’ll have to be satisfied with having other emojis like the Incredibles 2 characters to portray you in animated GIFs. Just open your Galaxy S9 or Galaxy S9+’s camera app then tap on the AR emoji mode. There’s a plus icon on the right hand side and then you need to install The Incredibles AR emoji pack from the Galaxy Apps store. Then go ahead and take those videos or GIFs with your own unique facial expressions and then send it to whomever you want to send them to. Here’s hoping for even more AR emoji features in the future. 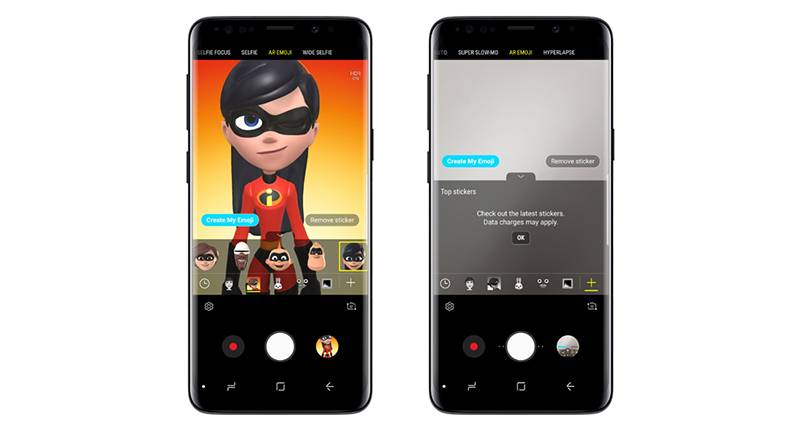