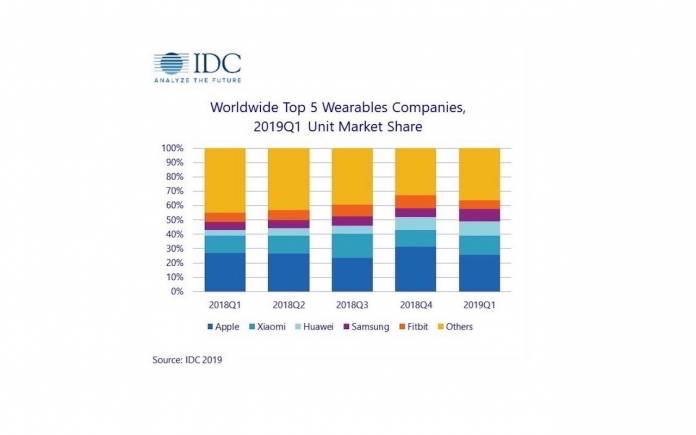 Gadget town may still be more obsessed with new smartphones but we know wearables are not going anywhere. Smartwatches aren’t getting more popular. The market is steady but it’s already good. OEMs may only improve on wearable technology and people will keep on buying them–the more advanced the smartwatch is, the better. We’re on Q2 2019 but we’re interested to know how are the numbers last quarter. IDC reports global shipments of wearables went up by 55.2% from last year. The International Data Corporation regularly reports the Worldwide Quarterly Wearable Device Tracker and reveals the latest in different categories.

Last quarter (Q1 2019), shipments reached 49.6 million units of wearable devices. About 63.2% of the number are smartwatches while the remaining percentage is for ear-worn devices. These ear-worn wearables are a result of earphones and headsets going wireless. Year over year, the number increased by 31.6% of sales of watches and wristbands.

It can be noted the popularity of these wearables are related to the growing focus on fitness and health. Many people are buying smartwatches or fitness trackers while brands are introducing health-related products, features, and services.

IDC lists the ‘Top 5 Wearable Companies by Shipment Volume, Market Share, and Year-Over-Year Growth, Q1 2019’. Note that the numbers are in millions.

On top of the list is Apple followed by Xiaomi, Huawei, Samsung, and Fitbit. Looking at Wrist-worn devices only, the ranking changes.

The ranking now lists Xiaomi, Apple, Huawei, Fitbit, and Samsung. We’re not surprised about Xiaomi because the Chinese OEM has since grown into a lifestyle brand. Apple is still making waves with the Apple Watch. Note that there are no Wear OS-powered smartwatches on the list. All these brands run their own own wearable platforms.

Huawei isn’t exactly popular in the wearable game but the top Chinese brand has grown bigger. Fitbit is a familiar name in the digital health and wellness business while Samsung is still the No. 1 mobile brand.

The numbers are acceptable. We’re more than curious about the coming Q2 or Q3 reports especially since big firms are cutting their ties with Huawei. We’re anticipating a big shift in the industry if not this year, maybe in 2020.