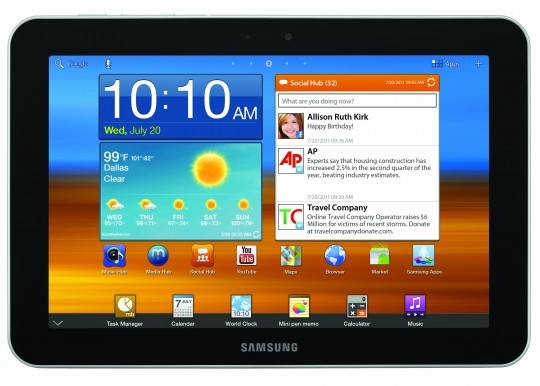 Some of us are always on the lookout for news of Jelly Bean updates, but of course, there are a ton of devices out there that aren’t even on Ice Cream Sandwich yet. There are many Android users who are patiently awaiting the arrival of an Ice Cream Sandwich update that may never arrive. It’s almost tragic in a way, but luckily, we’re finding out today that the Samsung Galaxy Tab 8.9 3G (GT-P7300) won’t be one of the devices stuck in the past.

According to the folks over at SamMobile, the update to Ice Cream Sandwich is beginning to roll out to the Galaxy Tab 8.9 3G. We’re talking Android 4.0.4 specifically, with SamMobile saying that users in Austria are able to download the update over-the-air or snag it through Samsung Kies. No word on other regions at this moment, but it stands to reason that Ice Cream Sandwich will be hitting most of the Galaxy Tab 8.9 3Gs roaming around out there in short order.

Of course, Samsung is a little late to the punch with this one, considering that Android 4.0.1 released over a year ago. Better late than never though, right? Galaxy Tab 8.9 users should notice some pretty nice improvements after installing Ice Cream Sandwich, as it should make your whole tablet run better while increasing battery life at the same time.

Ice Cream Sandwich isn’t as desirable as Jelly Bean might be, but there ultimately isn’t anything wrong with ICS, especially if you’ve been running an older version of Android all this time. Even with newer tablets and phones to worry about, we’re happy to see Samsung supporting its first line of Galaxy-branded tablets with this update. Check out our story timeline for more on the Galaxy Tab 8.9!