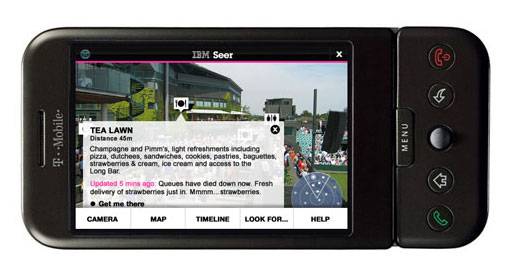 We have talked before about altered reality browsers and applications for the Android platform. The applications take things like photos or maps and overlay them with data from local users.

IBM has announced a new Android app that is designed to give visitors to the Wimbledon tennis tournament more information about the tournament and the venue. The app is called Seer Android and the service is being tested on the G1.

Point the G1 at the court during a match and you can get the court number and details of previous and current matches being played on the court. You can also get info about snack bars and other eateries at the venue. The app is very cool.