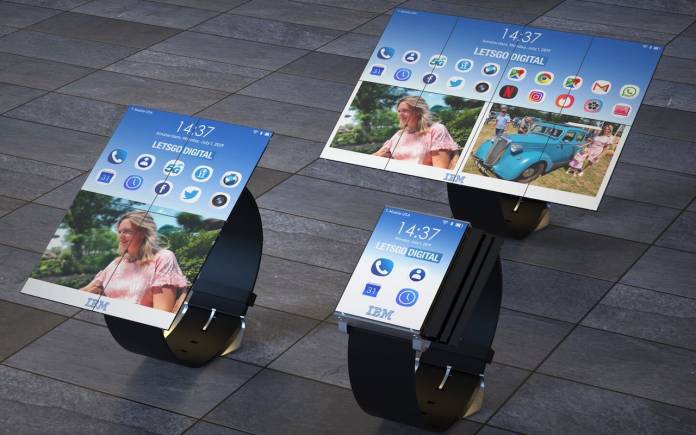 IBM has always been known as one of the top computer makers in the world during the time when PCs and laptops were widely used in different industries. We know the market has remained stagnant or even declined in revenue especially since the smartphones and tablets have entered the arena. The Android community hasn’t focused much on the brand and to be honest, our last mention was when we noted how Android users pale in comparison to iOS counterparts for Cyber Monday shopping back in 2013. IBM was probably an Android partner before but we have no idea what it’s up to know, at least, when it comes to mobile phones.

A recent set of images was posted by LetsGoDigital. The photos show a special smartwatch from IBM that can turn into a tablet and a smartphone. The concept wearable device folds out into the said mobile gadgets. There is no actual product yet but IBM has applied for a patent.

The patent contains a new electronic device featuring a multi-fold display. It’s unique in the sense it can work three functions–as a smartwatch, smartphone, and a tablet. So instead of just a 2-in-1 gadget, it’s 3-in-1. We’re not sure though if such design will ever make it to production because it appears to be complicated and ambitious.

IBM is looking at a device with a flexible display. It folds out to become a bigger screen to work like a smartphone. Fold it out further and you get a tablet. The patent specifically refers to a ‘variable display size for an electronic display device’. It’s actually an old patent from 2019 filed with the United States Patent and Trademark Office (USPTO).

LetsGoDigital made the 3D renders based on the information provided. The illustrations give us a glimpse of what could be the smartwatch-smartphone-tablet from IBM. While most OEMs are only thinking about a smartphone-tablet combo, here’s IBM going ahead with such design. Let’s just wait and see if an when the patent becomes a reality.