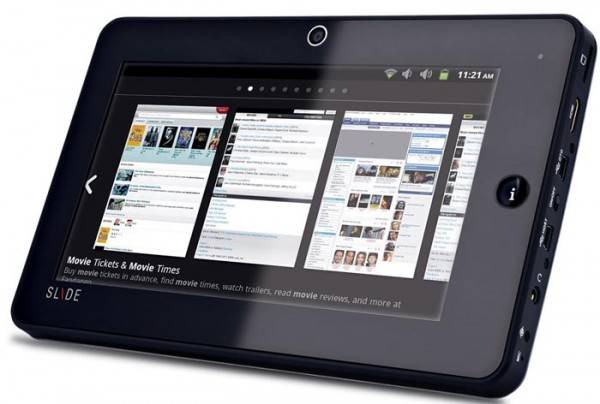 If there’s one sort of device that we’ve over this past year come to find we’re in no shortage of, it’s Android “tablets”. I put quotation marks around that word because as Android evolves and groups like Samsung bring out devices that bridge the gap, the word “tablet” will be used less and less by publishers while “Android device” used in a general sense will become much more likely a term for news releases. What we’ve got here, before that wave covers us all, is an Android device which has a 7-inch display, runs Android 2.3.x Gingerbread, and has about as many ports as you could ask for along the side.

This device might look familiar if you’re the sort of person that believes in the aspect-ratio-means-copying sort of position many manufacturers are finding themselves the victim of in court cases over patents lately, but when you take a look at the odd features here and there, you may well have the most awesome little do-it-all device yet to come out of manufacturer iBall. Actually since iBall’s only device even close to this Android tablet is the odd digital note taker “TakeNote” and they’ve had no Android devices before this, this certainly IS their greatest Android effort to date.

This device features 8GB built-in storage, a 2 megapixel front-facing camera, USB host port, HDMI output (full sized port), miniUSB, headphone jack, power jack, and a port we can’t quite get a good enough look at to confirm. It’s also got the ability to work with microSD cards, has a pretty decent sized 4400 mAh battery under the hood, and it supports 3G via USB dongle – strange for the USA, but right at home in its release country of India. This device also has Bluetooth of some sort and Wi-fi capability.

The iBall Slide is priced at 13,995 INR ($305 approx) and will hit the Indian market soon. Like many international Android devices, it’s unlikely that you’ll have the Android market on this device out of the box, and this is not by any means the only “affordable” Android tablet on the Indian market, either. Our source for this tablet release lets us know, as they are in the know, that the following names make up the whole “affordable Android tablets” market in India at the moment: Reliance 3G Tab, Beetel Magiq, Magnum Pepper Tablet PC and the Mercury mTab.