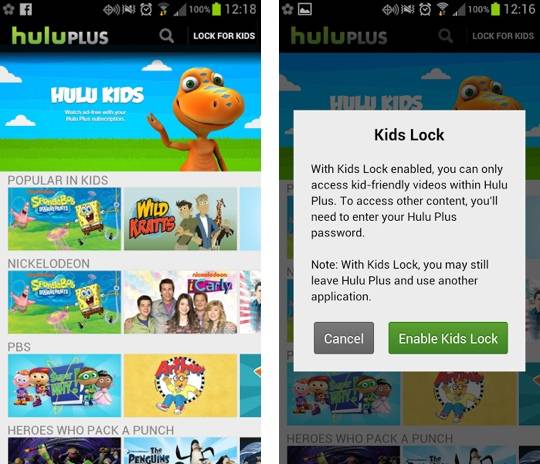 Back in early November, Hulu announced a new child-friendly feature. It is called Hulu Kids and just as the name would imply, it arrives as a child-friendly section within Hulu. This was initially rolled-out on the web as well as on the PlayStation 3. And well, a recent update has added Hulu Kids to the Android app.

Hulu Kids is basically just another section in the Hulu app, similar to Popular Clips, Popular TV, Recently Watched and other sections. Once in the Hulu Kids section you will see only child-friendly content such as SpongeBob SquarePants, Kung Fu Panda, Caillou, iCarly, Arthur and more.

The kids section is further broken down by popular content as well as by network and by age. You can also use the “Lock For Kids” button which will basically keep your child from browsing over into content that may not be so appropriate.

Of course, the addition of Hulu Kids is not the only change in this most recent update. The Hulu Plus app has also gotten some minor bug fixes and improvements and new trays to help make the content discovery process a bit easier. Finally, those using Hulu Plus on a Droid RAZR HD, you will want to grab this update as it should take care of your video playback issues.