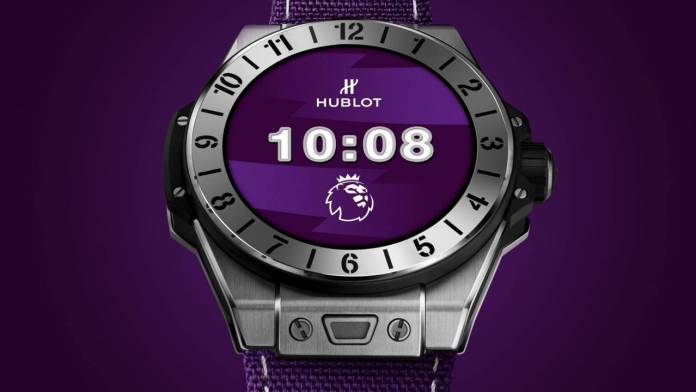 If you’re a fan of football, specifically England’s Premier League, and/or maybe even the color purple, this new variant of the Hublog Big Bang e is made specifically for you. The Big Bang e Premier League edition is still the same kind of smartwatch they released last year but this time around, it has football-related features and of course a design that would attract those who love the sport and this particular league. This is part of Google’s efforts to get traditional watchmakers into the Wear OS platform, even as original smartwatch makers seem to be moving away from it.

When it comes to the smartwatch specs, it’s still the same Big Bang e that Hublot released last year. This means you get a Qualcomm Snapdragon Wear 3100 and not the latest processor that the company released. It still has a 390 x 390 screen, a 42mm body, 1GB of RAM, and 8GB of internal storage. So if you’re looking for the most advanced smartwatch, then this may not be the one for you.

But if you’re a fan of the Premier League, then you will probably like the design of this smartwatch. It has all the branding including the straps that come in purple since that’s the official color of the league. You also get a pre-installed watchface and theme that reflects the branding. But if you don’t like the color purple, you can always switch it out for another color as it’s pretty easy to replace.

As for the football stuff, the Hublot Loves Football Premier League app is pre-installed. You’ll get animated notifications for things like kickoff times, goals, penalties, and other important things to know about the games. So expect your smartwatch to be pretty busy during the weekends when most of the games are played during the season. Of course, you have all the other smartwatch features that a Wear OS device supports.

The Hublot Big Bang e Premier League smartwatch obviously will not be cheap. It will cost you $5,200. And since there are only 200 of these that will be made, you better shell out that money if you’re a hardcore football fan that has money to spare.