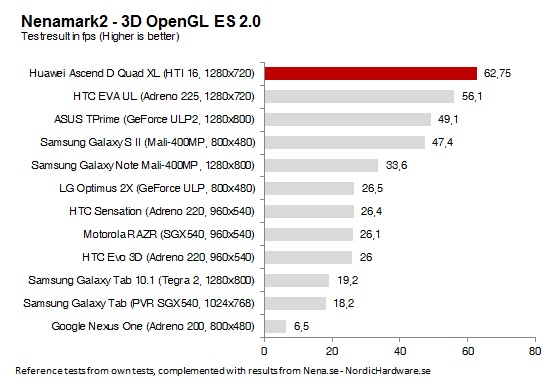 Huawei recently announced their brand new Ascend D Quad XL with their own in-house custom built quad-core processor. No Qualcomm or NVIDIA Tegra 3 is present in this device. They’ve been touting it as the “worlds fastest” and some recently leaked benchmarks might be showing just that. Check out these impressive results below from Nenamark and a few other tests where the new Huawei quad-core tops the charts.

We had a chance to get a quick hands-on with the new Huawei phone during Mobile World Congress and it sure seemed fast running on Android 4.0 Ice Cream Sandwich but we weren’t able to do much testing like we have here. These benchmark tests show it competing against some of the best and fastest silicon around like the NVIDIA Tegra 3 quad-core, and Samsung’s 1.4 GHz dual-core, and it beats them all according to these tests. 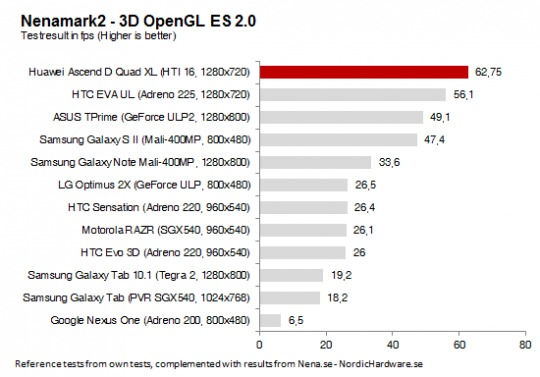 Above is a Nenamark result, a test we are more familiar with in the world of Android and here it has a decently large lead over the competition. Beating out the Tegra 3, and even Qualcomm’s new and still unreleased S4 1.5 GHz dual-core processor. Qualcomm has been saying it will perform better than quad-core chips and is more advanced with two Cortex-A15’s, but the Huawei here holds its own quite well.

We still haven’t seen what Samsung’s newest quad-core will be able to achieve, or their upgraded dual-core either, but I have a feeling it will be impressive. Apple’s new A5X in the new iPad is supposed to be equally impressive and 4x as powerful as the Tegra 3 in gaming, but that hasn’t been proven yet. It looks like things are really starting to heat up in the SoC game with Qualcomm, NVIDIA, TI, Samsung Exynos, and now this Huawei processor. I can’t wait to see more and look forward to seeing these upcoming phones from Huawei as they start to finally make a push for the high end market.