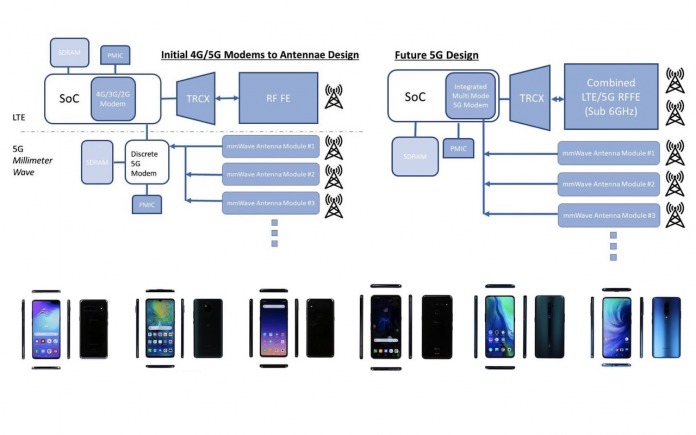 A new teardown has revealed that Qualcomm’s 5G chip may be better than Huawei’s in terms of efficiency and size. IHS Markit has checked the insides of six new smartphones that support 5G. There aren’t many 5G phones yet but we can list the following: Huawei Mate 20X, Samsung Galaxy S10 5G, LG V50 THINQ, Xiaomi Mi Mix 3, OnePlus7/7T, and the ZTE Axon 10 Pro. The Galaxy Note 10+ 5G isn’t included in the teardown yet because it’s relatively new.

A series of phone teardowns revealed that Huawei uses a bigger and less efficient 5G chip. The Balong 5000 5G modem is an addition to the Huawei Mate 20X because the Kirin 980 processor supports only 4G/3G/2G. The teardown has shown us Huawei’s solution is not that efficient. It’s larger in size but it’s not exactly less energy efficient because of many factors.

Huawei takes pride in its own 5G chip but that has left the Kirin 980 practically unused. The addition off the 5G modem has made the phone more expensive. With two chips running inside, it’s more costly and less battery efficient. The phone works harder too, producing more PCB footprint. Another thing, the Balong 5000 doesn’t support the 5G Millimeter Wave.

The Balong 5000 5G chip has been found to be 50% larger than the X50 5G modem from Qualcomm. The Balong also requires more memory to work–at least 3GB RAM. To be fair, the Huawei Mate 20X was designed last year so the 5G chip is “older” compared to the other chips used.

Huawei’s Balong 5G chip’s size is almost the same as Samsung’s Exynos 5100 modem. IHS has recommended the use of a single 5G/4G/3G/2G modem may be better in the future compared to two separate modems (5G and 4G/3G/2G). Such allows convergence of the modems and other related parts, causing overall efficiency.