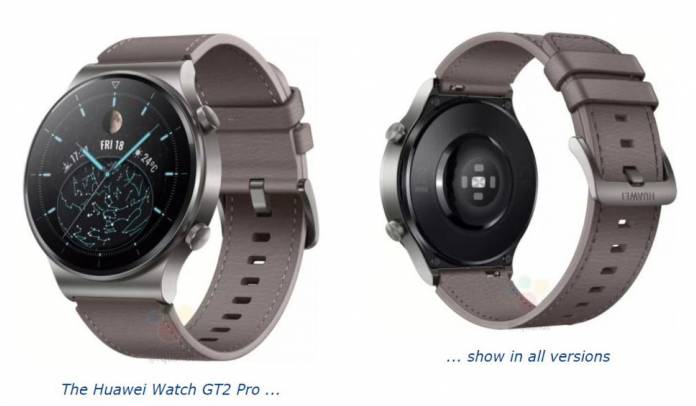 Smartwatches continue to be an in-demand device during these times when people are trying to be healthy (or healthier) in the midst of the pandemic. Huawei is set to release a new one, a slightly improved version of its Huawei Watch GT2 called the, surprise surprise, Huawei Watch GT2 Pro. Its main draw seems to be its long battery life and wireless charging but its specs are pretty much similar to its predecessor. The wearable device is expected to be released in Germany in the next few weeks but no news yet as to the other markets.

German tech website Win Future shared some photos and specs of the supposedly soon-to-be-released smartwatch. The Huawei Watch GT2 Pro has a 1.39-inch circular OLED display. It has 454×454 pixels resolution and a diameter of either 42mm or 46mm. It has smaller bezels than the previous model and may also have a smaller screen resolution. It is encased in stainless steel and will have either plastic or leather straps. The renders show it looks elegant enough so you can wear it for more formal or business attires.

Its main draw is a 455mAh battery that they claim has a battery life of up to 14 days if used right. This is because it uses Huawei’s proprietary operating system and not the battery hungry Wear OS. It can be charged wirelessly as well if the time comes when you need to charge it. The other main specs seem to be similar to the Huawei Watch GT2 with its 32MB RAM, 4GB of flash memory, water-resistance of up to 50 meters, and GPS support. By the way, the 455 mAh battery will only be for the 46mm variant.

You also get the usual fitness features that people are looking for in smartwatches like step counter, sleep tracker, heart rate monitor, stress levels, sports modes for activity tracking, and even Sp02 tracking or blood oxygen levels as well. It will support Bluetooth 5.1 connectivity. It has the usual sensors like gyroscopes to help you support those fitness functions. You can also use it as a music player if you save music within the flash memory and you connect it to wireless headphones.

The Huawei Watch GT2 Pro is expected to come out in Germany over the next couple of weeks and it will cost you 280 euros. Hopefully we also get news on which other markets it will eventually be available.