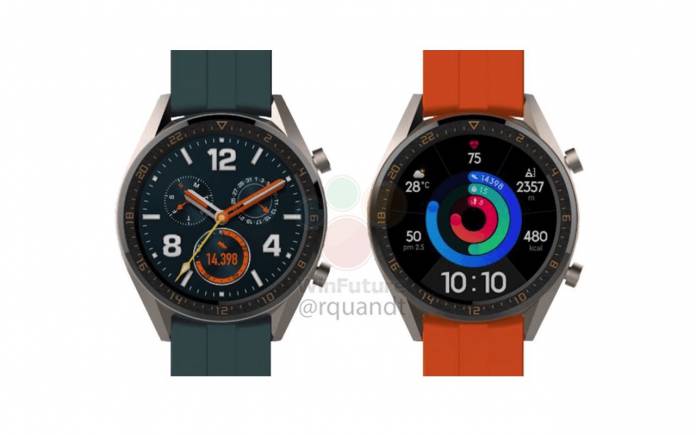 Huawei is preparing to release the new P30 series. Alongside the new flagship smartphones, the top Chinese OEM is also expected to release a new Huawei Watch GT. It will be a new version already but we’re not sure if it’s the same one that was made available for pre-order in the US last month. Leaked images are now ready and now we look forward to the Huawei Watch GT Elegant and Huawei Watch GT Active. These two models will be available in two color variants. Expect the Orange and Dark Green Huawei Watch GT wearables.

The size of the watches appears to be almost the same so expect the same 1.39-inch OLED screen. The battery may be lithium-polymer now and not lithium-ion.

The changes may not be noticeable to the ordinary eyes but for those familiar with the design, the change in colors are obvious. The keys on the edge are no longer conical as described earlier.

A Huawei Watch GT Elegant will also be ready in classic colors: black and white. It will be more affordable at 229 euros ($258). The Active variant will cost 249 euros which are about $280 in the US.

The last time we heard, the Huawei Watch GT doesn’t run Wear OS. Huawei has its own operating system for its wearables but we’re crossing our fingers it will join the Wear OS ecosystem.