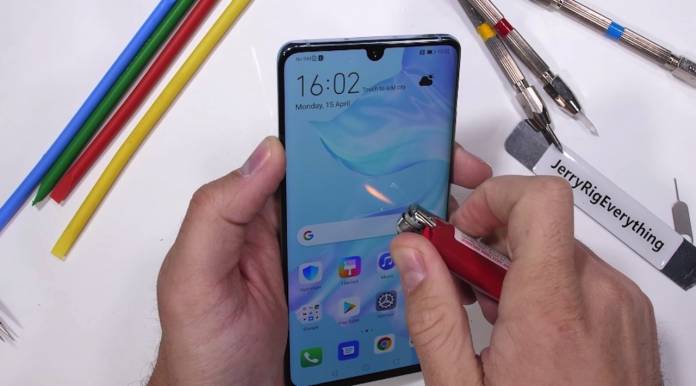 The Huawei P30 Pro Durability Test is done. We’ve only been waiting for this since reviews have been favorable. The smartphone is currently the DxOMark King, replacing the Mate 20 Pro and the Huawei P20 Pro. It is currently tied with the Samsung Galaxy S10 5G which came as a surprise. Zach Nelson aka JerryRigEverything got his hands on the phone which isn’t officially released in the USA. You can still get one though from retailers importing Huawei phones. The new mobile king has been opened by an official Huawei repair guy, revealing that parts are not easily replaceable. They can be but you may have to go past through heavy glues.

First look at the Huawei P30 Pro, the phone may remind you of cotton candy. Little girls may love the effect. Zack even describes it as “unicorn sneeze”. We won’t contradict the description but it’s true. The “pearly pinkish blue” will make you think of candies, unicorns, and glitters.

As usual, the device looks sleek yet sturdy. The premium look and feel that Huawei P phones are known for are still evident. It boasts a notch at the top so definitely, Huawei hasn’t really gone far as implementing the camera hole design or pop-up selfie mechanism.

The main selling point of the Huawei P30 Pro is the quad camera system which has already proven to be worth your money–that is, if you have the means and are very into mobile photography.

The scratch test reveals the screen scratches at level 6. Deeper grooves are at level 7. Scratching the selfie camera part housing the 32MP front-facing shooter does little.

The “cupcake frosting colored phone” features mostly metal on the sides that scatch as normal metal would. We see a USB port and no headphone jack, sorry. The SIM card tray shows some red rubber ring so water won’t get in.

The screen passes the burn test by lasting up to 22 seconds under flame before the part turns to white. Unfortunately, the screen doesn’t recover for some reason. Meanwhile, the Huawei P30 Pro passes both bend tests so you know the smartphone is really durable.